Phryne's real name was Mnēsarétē ("commemorating virtue"), but owing to her yellowish complexion she was called Phrýnē ("toad"). This was a nickname frequently given to other courtesans and prostitutes as well. The exact dates of her birth and death are unknown, but she was born about 371 BC. In that year Thebes razed Thespiae not long after the battle of Leuctra and expelled its inhabitants.

This painting replicates Delaroche's most famous work, a mural in oils and wax (1836-41) in the auditorium of the École des Beaux-Arts in Paris, France's most prestigious art school. Delaroche's pupil, Charles Béranger, is thought to have begun this replica in 1841, but the master completed it following his pupil's death in 1853. It provided a basis for L.-P. Henriquel-Dupont's engraving reproducing the composition. 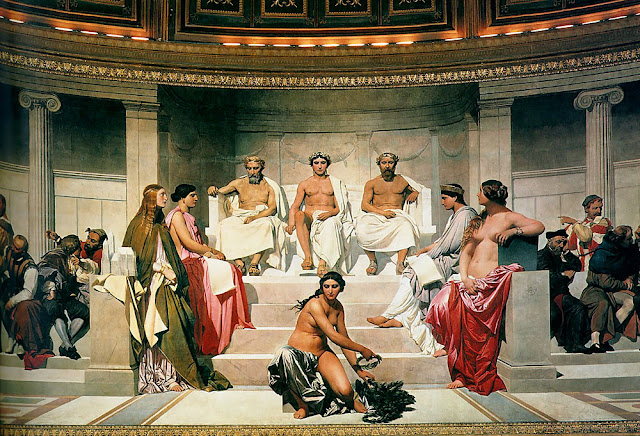 Athenaeus Naucratita, a Greek rhetorician and grammarian, provides many anecdotes about Phryne. He praises her beauty, writing that on the occasion of the festivals of the Eleusinia and Poseidonia she would let down her hair and step naked into the sea. This would have inspired the painter Apelles to create his famous picture of Aphrodite Anadyomene (Rising from the Sea also portrayed at times as Venus Anadyomene). Supposedly the sculptor Praxiteles, who was also her lover, used her as the model for the statue of the Aphrodite of Knidos.

Praxiteles of Athens
The Aphrodite of Knidos

The Aphrodite of Knidos was one of the most famous works of the ancient Greek sculptor Praxiteles of Athens (4th century BC). It and its copies are often referred to as the Venus Pudica ("modest Venus") type, on account of her covering her naked pubis with her right hand. Variants of the Venus Pudica (suggesting an action to cover the breasts) are the Venus de' Medici or the Capitoline Venus.

Praxiteles produced two more statues for her, a statue of Eros which was consecrated in the temple of Thespiae 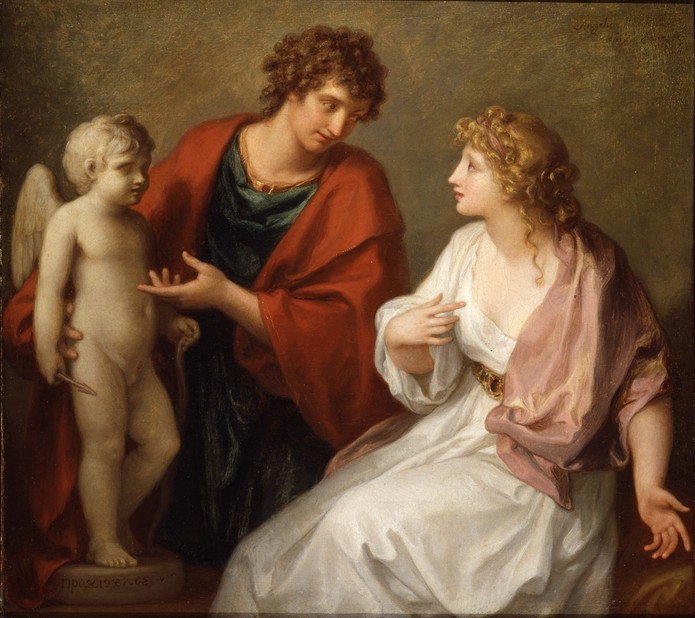 and a statue of Phryne herself which was made of solid gold and consecrated in the temple of Delphi.

Athenaeus alleges she was so rich that she offered to fund the rebuilding of the walls of Thebes, which had been destroyed by Alexander the Great in 336 BC, on the condition that the words "Destroyed by Alexander, restored by Phryne the courtesan" be inscribed upon them.

The best known event in Phryne's life is her trial. Athenaeus writes that she was prosecuted for a capital charge of impiety, and defended by the orator Hypereides, who was one of her lovers. When it seemed as if the verdict would be unfavourable, Hypereides removed Phryne's robe and bared her breasts before the judges to arouse their pity. 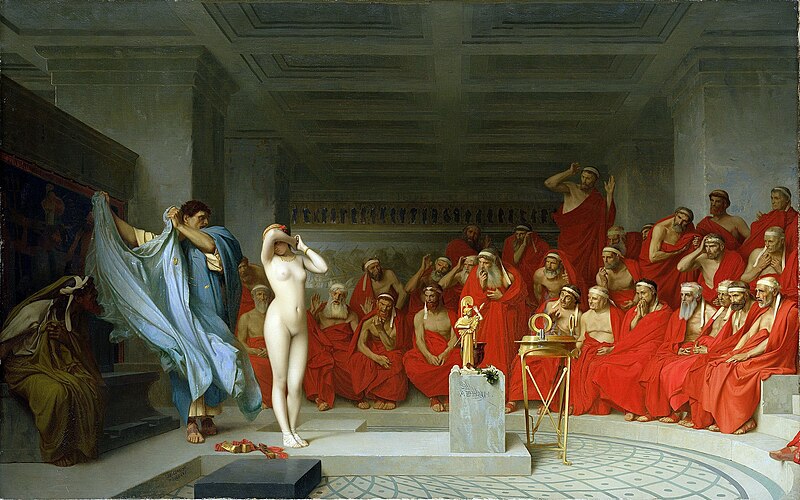 Her beauty instilled the judges with a superstitious fear, who could not bring themselves to condemn "a prophetess and priestess of Aphrodite" to death. They decided to acquit her out of pity. 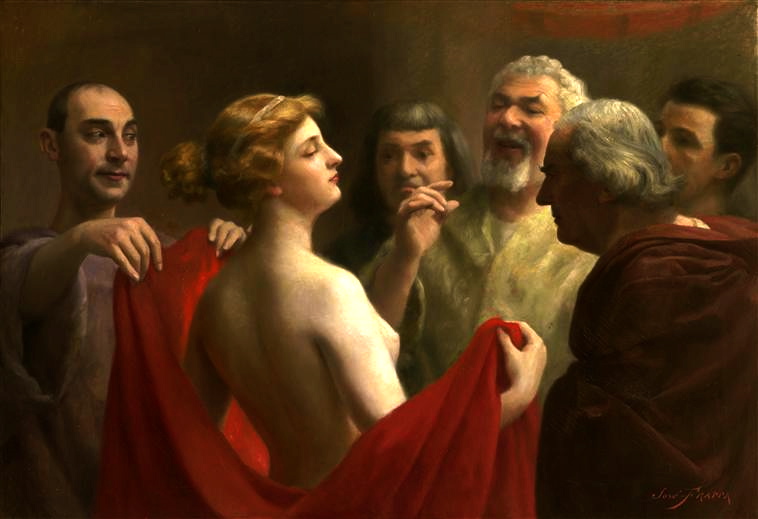 Due to her beauty, she also inspired much later works: The famous Greek courtesan Phryne (4thC BC fl.) reclining invitingly to left against a cushion, pointing and looking towards the philosopher Xenocrates (396 BC - 314 BC), who draws back. Phryne tested the legendary self-control of Xenocrates, one of Plato's successors and scholarch/rector of the Academy 339-314 BC. 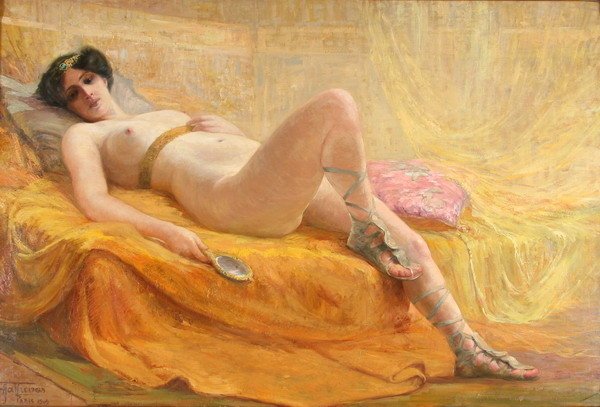 Louis Lagrenée
Courtesan Phryne before their judges
Watercolor and pen and brown ink over white heightening on paper
H 17.2; B 19.3 cm