11 Works - RELIGIOUS ART - Paintings from the Norse mythology, with footnotes, The Valkyries

In Norse mythology, a valkyrie (from Old Norse valkyrja "chooser of the slain") is one of a host of female figures who choose those who may die in battle and those who may live. Selecting among half of those who die in battle (the other half go to the goddess Freyja's afterlife field Fólkvangr), the valkyries bring their chosen to the afterlife hall of the slain, Valhalla, ruled over by the god Odin

William T. Maud (British, 1865 – 1903), The Ride of the Valkyrie (1890),  is a virtually unknown nineteenth century British artist and The Ride of the Valkyrie is his only known painting. During the Boer War (1899-1902) Maud worked as a war artist for the news organization The Daily Graphic – a British illustrated news journal. With the massive growth in literacy throughout the British Empire, coupled with the development of the global telegraph network, the illustrated news weekly flourished. Newspapers sent special war artists to the battlefields to create pictorial records of specific battles, as well as to sketch images depicting everyday life for soldiers on the front line. Many artists of this era took this dangerous assignment for the simple reason that it was more lucrative than painting in a commercial studio. The war artists were untrained for the battlefield, but by virtue of their vocation they were placed in the middle of the action, exposing them to the risk of injury, capture and disease. With pencils, brushes and sketchbooks their job was to go wherever the winds of combat blew, to live under fire, to endure the deprivation, hardship and danger of the campaign, and to send to the illustrated newspapers that employed them rough and hasty sketches. William T. Maud died from enteric fever while covering the Second Boer War; he was only 38 years old. More


Valhöll while Odin sits upon his throne, flanked by one of his wolves, c. ca. 1905

There, the deceased warriors become einherjar fighters. When the einherjar are not preparing for the events of Ragnarök, the valkyries bear them mead. Valkyries also appear as lovers of heroes and other mortals, where they are sometimes described as the daughters of royalty, sometimes accompanied by ravens and sometimes connected to swans or horses.

The Valkyrie is, in the oldest strata of belief, a corpse goddess, represented by the carrion-eating raven. The name in Old Norse, valkyrja, as well as Old English wælcyrge means literally, "chooser of the slain." The word for valkyrie was used by Anglo-Saxon scholars to gloss the names of the Greco-Roman goddeses of vengeance and retribution, the Furies or Erinyes, as well as for the Roman goddess of war, Bellona. 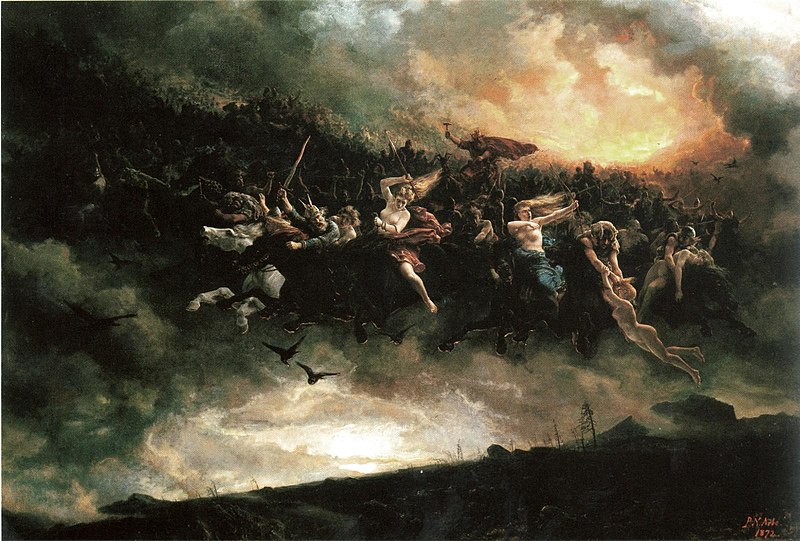 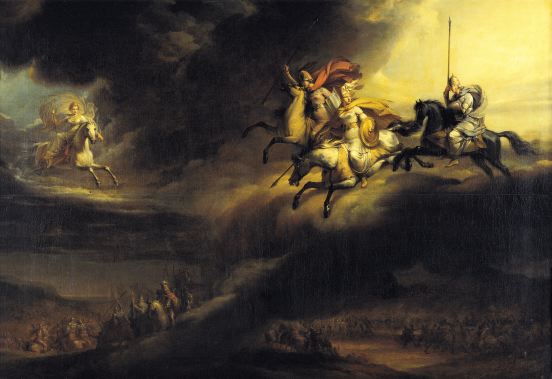 Johan Gustaf Sandberg (13 May 1782 – 26 June 1854) was a Swedish painter from Stockholm. He was foremost a history painter and used settings from Norse mythology and Swedish history. His most widely known work in this area are his frescoes in Uppsala Cathedral that depict the Swedish king Gustav Vasa. In addition to his history paintings, Sandberg painted a number of portraits. More

The Valkyrie is related to the Celtic warrior-goddess, the Morrigan, who likewise may assume the form of the raven. The Irish badb is at one and the same time a seeress foretelling the fate of men upon the battlefield and is also the carrion-crow or raven. 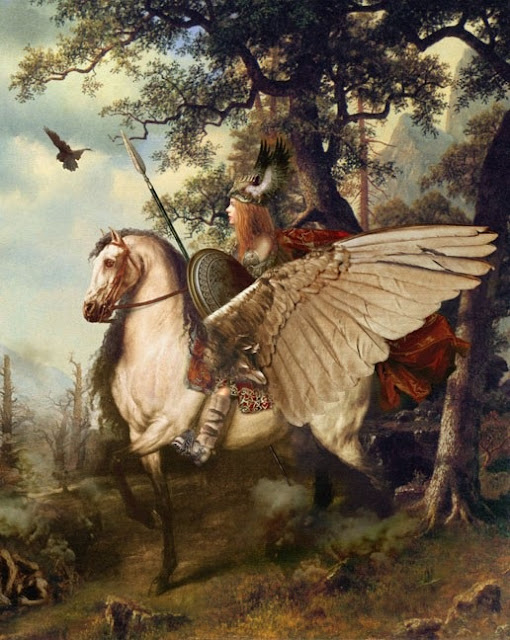 Howard David Johnson (born 2 September 1954) is an American photorealist Illustrator and painter most noted for historical, religious and mythological art. He works in a wide variety of mixed media ranging from oil on canvas to digital media. Though he paints in a realistic vein, he creates a world of folklore and mythical characters combining his traditional style and methods with contemporary digital techniques. Specializing in archetypal and idealized iconic imagery, he is a classically trained artist who is particularly influenced by the great illustrators of the late 19th century and the artists of the pre-Raphaelite period. More 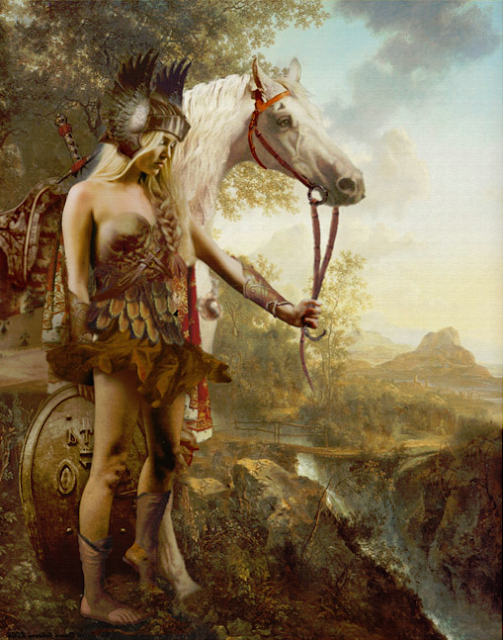 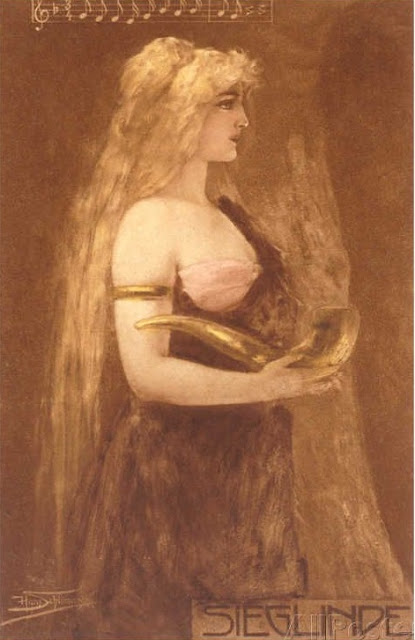 Ferdinand Leeke (April 7, 1859 - 1923) was a German Painter, famous for his depictions of scenes from Wagnerian Operas. A native of Burg bei Magdeburg, Germany, he studied at the Munich Academy under Johann Herterich (1843-1905), a genre and historical painter, and with Alexander von Wagner (1838-1919), a Hungarian genre and landscape painter.

Around 1889, Siegfried Wagner, the son of the composer Richard Wagner, commissioned Leeke to paint a series of paintings showing scenes from ten operas by Wagner. More

Images are copyright of their respective owners, assignees or others
Acknowledgement: Wikipedia, The Viking Answer Lady, Timeless Myths,