01 Work, RELIGIOUS ART - Luca Giordano's LOT, WITH HIS TWO DAUGHTERS FLEEING FROM THE BURNING CITY OF SODOM, With Footnotes - #125 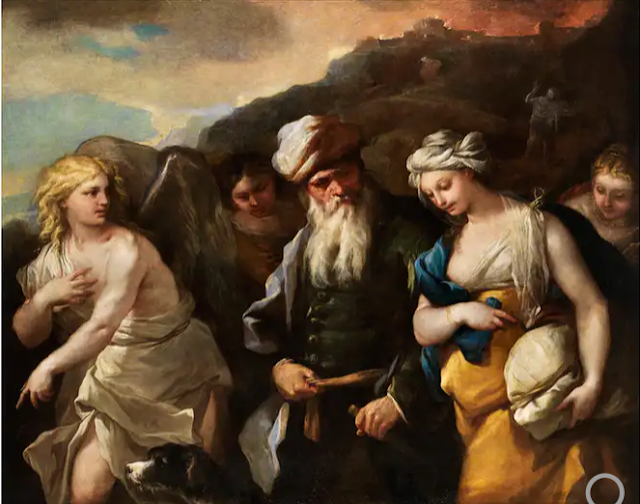 Lot, with a critical, thoughtful look, his head is slightly turned back, followed by one of the daughters, also wearing a white bandana. Her liberally painted upper body already points to the later known sequence of events. More on this painting

Lot was a patriarch in the biblical Book of Genesis. Notable episodes in his life include his travels with his uncle Abram (Abraham), his flight from the destruction of Sodom and Gomorrah, during which Lot's wife became a pillar of salt, and the seduction by his daughters so that they could bear children.

Lot, his wife, and two daughters are saved when God sends two angels to make sure they are out of Sodom before the city is punished for their wicked ways. Lot's request to have the family flee to the nearby small town of Zoar, instead of the mountains, is granted (Genesis 19:18 - 22). As they came into Zoar, God brought brimstone and fire upon the two sinful cities and totally cleansed the land of their existence. More Lot

Lot and his two daughters, Genesis 19:30-38,  left Zoar and settled in the mountains, for he was afraid to stay in Zoar. He and his two daughters lived in a cave. 31 One day the older daughter said to the younger, “Our father is old, and there is no man around here to give us children—as is the custom all over the earth. 32 Let’s get our father to drink wine and then sleep with him and preserve our family line through our father.”

That night they got their father to drink wine, and the older daughter went in and slept with him. He was not aware of it when she lay down or when she got up.

The next day the older daughter said to the younger, “Last night I slept with my father. Let’s get him to drink wine again tonight, and you go in and sleep with him so we can preserve our family line through our father.” So they got their father to drink wine that night also, and the younger daughter went in and slept with him. Again he was not aware of it when she lay down or when she got up.

Luca Giordano (18 October 1634 – 12 January 1705) was an Italian late Baroque painter and printmaker in etching. Fluent and decorative, he worked successfully in Naples and Rome, Florence and Venice, before spending a decade in Spain.

Born in Naples, Giordano was the son of the painter Antonio Giordano. In around 1650 he was apprenticed to Ribera, and his early work was heavily influenced by his teacher. Like Ribera, he painted many half-length figures of philosophers, either imaginary portraits of specific figures, or generic types.

He acquired the nickname Luca fa presto, which translates into "Luca paints quickly." His speed, in design as well as handiwork, and his versatility, which enabled him to imitate other painters deceptively, earned for him two other epithets, "The Thunderbolt" (Fulmine) and "The Proteus" of painting.

Following a period studying in Rome, Parma and Venice, Giordano developed an elaborate Baroque style fusing Venetian and Roman Influences. His mature work combines the ornamental pomp of Paul Veronese with the lively complex schemes, the "grand manner", of Pietro da Cortona. He is also noted for his lively and showy use of colour. More Luca Giordano