01 Painting, Olympian deities, by the Old Masters, with footnotes #36 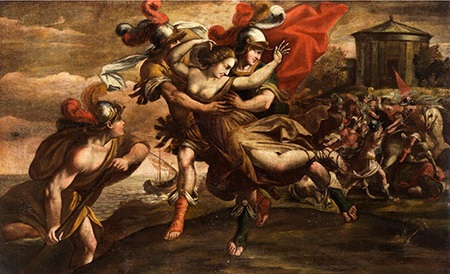 Italian master of the 17th century
THE ROYAL OF THE SABINERS
Oil on canvas. Relined.
117 x 187 cm.
Private collection

In the center of the large-format picture, in the open air, two Romans in armor with spring-loaded helmet, holding in their hands a young woman who defends herself with arms raised against their abduction. On the left side of the picture the wide sea with a big sailboat. A young man with a helmet and a paddle in his hands seems to be waiting for the abductee to take her away with his boat. On the right side underneath a round temple eager battles fight, in which also a horse is to be seen. More on this painting

The Sabines were an Italic people that lived in the central Apennine Mountains of ancient Italy, also inhabiting Latium north of the Anio before the founding of Rome.

The Sabines divided into two populations just after the founding of Rome, which is described by Roman legend. The division, however it came about, is not legendary. The population closer to Rome transplanted itself to the new city and united with the preexisting citizenry, beginning a new heritage that descended from the Sabines but was also Latinized. The second population remained a mountain tribal state, coming finally to war against Rome for its independence along with all the other Italic tribes. After losing, it became assimilated into the Roman Republic. More on The Sabines

In art history, "Old Master" refers to any painter of skill who worked in Europe before about 1800, or a painting by such an artist. The term "old master drawing" is used in the same way.

In theory, "Old Master" applies only to artists who were fully trained, were Masters of their local artists' guild, and worked independently, but in practice, paintings produced by pupils or workshops are often included in the scope of the term. Therefore, beyond a certain level of competence, date rather than quality is the criterion for using the term. More on the Old Master