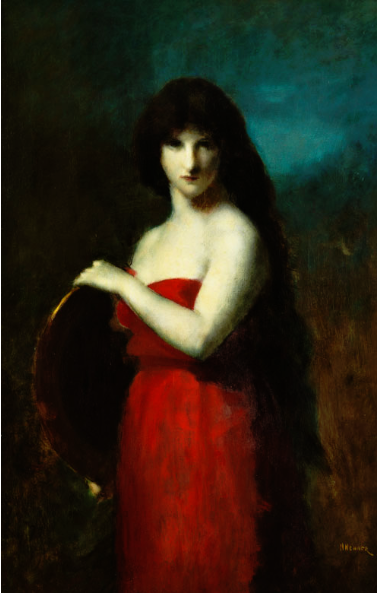 Painted circa 1903. Henner's painting depicts Salome as a three-quarter portrait in a red dress and an almost pale complexion, emerging from the dark background like a figure of light. More on this painting


Salome was the daughter of Herod II and Herodias. She is infamous for demanding and receiving the head of John the Baptist, according to the New Testament. According to Flavius Josephus's Jewish Antiquities, Salome was first married to Philip the Tetrarch of Ituraea and Trakonitis. After Philip's death in 34 AD she married Aristobulus of Chalcis and became queen of Chalcis and Armenia Minor. They had three children. Three coins with portraits of Aristobulus and Salome have been found. Her name in Hebrew meaning "peace". More on Salome


Jean-Jacques Henner (15 March 1829 – 23 July 1905) was a French painter. Henner was born at Bernwiller (Alsace). He began his studies in art as a pupil of Michel Martin Drolling and François-Édouard Picot. In 1848, he entered the École des Beaux Arts in Paris, and took the Prix de Rome with a painting of Adam and Eve finding the Body of Abel in 1858. In Rome, he was guided by Flandrin, and painted four pictures for the gallery at Colmar among other works.

Henner's most widely known work is his 1885 portrait of Saint Fabiola. Although the original is now lost, it was copied by artists around the world for devotional purposes. Artist Francis Alÿs has collected over 500 copies of the portrait in a variety of media. The collection, known as the "Fabiola Project," is on exhibit at the Byzantine Fresco Chapel of the Menil Collection in Houston from May 21, 2016 - May 13, 2018.