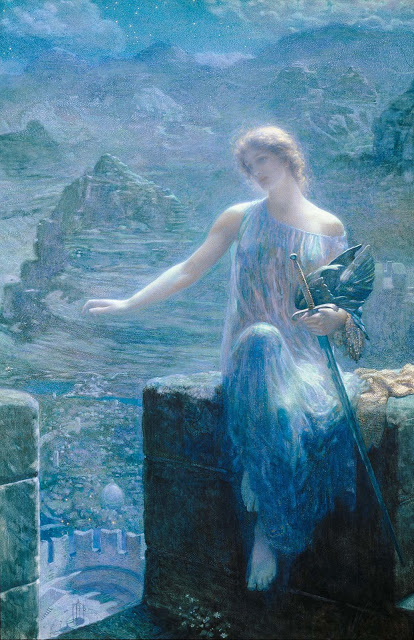 Usually depicted as warlike and strong, the Pre-Raphaelite-influenced works of Frederick Sandys and Edward Robert Hughes shows them in a more delicate, feminine light.

Hughes’ Valkyrie is contemplative.  Her face is sorrowful and the misty blue overtones of the painting create a supernatural atmosphere. It is a beautiful yet somber work that indicates she does not take her duty lightly, she feels the weight of the souls she has helped to transport. More on this work

In Norse mythology, a valkyrie (from Old Norse valkyrja "chooser of the slain") is one of a host of female figures who choose those who may die in battle and those who may live. Selecting among half of those who die in battle, the valkyries bring their chosen to the afterlife hall of the slain, Valhalla, ruled over by the god Odin. There, the deceased warriors become einherjar. When the einherjar are not preparing for the events of Ragnarök, the valkyries bear them mead. Valkyries also appear as lovers of heroes and other mortals, where they are sometimes described as the daughters of royalty, sometimes accompanied by ravens and sometimes connected to swans or horses. More on the Valkyrie

Edward Robert Hughes RWS (5 November 1851 – 23 April 1914) was an English painter who worked prominently in watercolours. He was influenced by his uncle, and eminent Pre-Raphaelite, Arthur Hughes. Having settled on his career choice, Edward Hughes attended Heatherley's in London to prepare himself for the chance of auditioning for the Royal Academy School. Hughes became a student at the Royal Academy School in 1868. While Pre-Raphaelitism played an influential part in shaping Hughes work, Aestheticism is also seen in his paintings.

Edward Hughes is widely known for his works Midsummer Eve and Night With Her Train of Stars yet he built a career as a portrait painter to the upper classes. In addition to being an accomplished artist himself, Edward Hughes was also a studio assistant to the elder artist and Pre-Raphaelite William Holman Hunt. Hunt himself suffered from glaucoma. Two of the paintings that Hughes worked on with Hunt were The Light of the World, and The Lady of Shalott. On his own he experimented with ambitious techniques and was a perfectionist.

Hughes held several important offices within the artistic community over his life time such as becoming a member of the Art Workers Guild in 1888, and was on their committee from 1895–1897. He was elected to Associate Membership of The Royal Water Colour Society (ARWS) on February 18, 1891.

Edward Hughes moved to St Albans, Hertfordshire, where he was later stricken with appendicitis; he died after surgery on April 23, 1914 in his home. More on Edward Robert Hughes