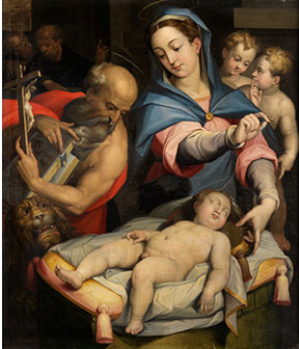 Baby Jesus lying on a cushion, diagonally across the picture, with St. Mary behind him, holding a veil between her fingertips and thus already pointing to the child's career. Covered by a nimbus, as well as St. Jerome, characterized by the lion's head, which is visible under his forearm and his cardinal robe. Right behind Maria two putti. More on this painting

Jerome (Eusebius Sophronius Hieronymus, c.  347 – 30 September 420) was a priest, confessor, theologian and historian. He was the son of Eusebius, born at Stridon, a village near Emona on the border of Dalmatia and Pannonia, then part of northeastern Italy. He is best known for his translation of most of the Bible into Latin (the translation that became known as the Vulgate), and his commentaries on the Gospels. His list of writings is extensive.
The protégé of Pope Damasus I, who died in December of 384, Jerome was known for his teachings on Christian moral life, especially to those living in cosmopolitan centers such as Rome. In many cases, he focused his attention to the lives of women and identified how a woman devoted to Jesus should live her life. This focus stemmed from his close patron relationships with several prominent female ascetics who were members of affluent senatorial families.
He is recognised as a Saint and Doctor of the Church by the Roman Catholic Church, the Eastern Orthodox Church, the Lutheran Church, and the Anglican Communion. His feast day is 30 September. More on Jerome

Orazio Samacchini (20 December 1532 – 12 June 1577) was an Italian painter of the late-Renaissance and Mannerist style, active in Rome, Parma, and his native city.


He was born and died in Bologna. A close friend of Lorenzo Sabbatini, Samacchini traveled to Rome where he participated in 1563 in the decoration of the Vatican Belvedere and of the Sala Regia of Pius IV, along with Taddeo Zuccari and his brother. He returned to Bologna, where he was influenced by Pellegrino Tibaldi. Sammacchini painted for the Palazzo Vitelli a Sant'Egidio, Città di Castello, San Giacomo Maggiore, the church of Corpus Domini in Bologna, and Santa Maria Maggiore (Santa Maria della Vita?) in Bologna. He painted frescoes of Virtues, Prophets and Angels in Sant'Abbondio, Cremona. More on Orazio Samacchini