01 Painting, Olympian deities, by the Old Masters, with footnotes #40 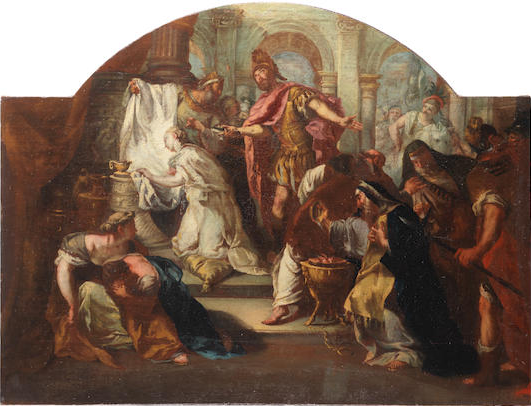 Polyxena, in Greek mythology, a daughter of Priam, king of Troy, and his wife, Hecuba. After the fall of Troy, she was claimed by the ghost of Achilles, the greatest of the Greek warriors, as his share of the spoils and was therefore put to death at his tomb. In post-Classical times the story was elaborated; it was said that a peace had been arranged and Achilles was to marry Polyxena, but Paris treacherously shot him. More on Polyxena

Giambattista Pittoni or Giovanni Battista Pittoni (6 June 1687 - 6 November 1767) was a Venetian painter of the late Baroque or Rococo period. He was among the founders of the Academy of Fine Arts of Venice , of which in 1758 he became the second president, succeeding Tiepolo.
Pittoni studied under his uncle Francesco Pittoni, a well-known but undistinguished painter of the Venetian Baroque.
Pittoni joined the Fraglia of the Venetian Painters, the Venetian guild of painters, in 1716. From, probably, the same year until his death he was a member of the College of Painters, of which he became prior in 1729.  He was elected to the Clementine Academy of Bologna in 1727. In 1750 he was one of the forty-six members of the Veneta Publish Academy of Painting, Sculpture and Architecture, which later became the Academy of Fine Arts of Venice ; from 1758 to 1760 he succeeded Tiepoloas president of the academy, and was elected for a second term in 1763–64. More on Giambattista Pittoni