05 Paintings, RELIGIOUS ART - Interpretations of the Bible! by The Old Masters, With Footnotes # 72 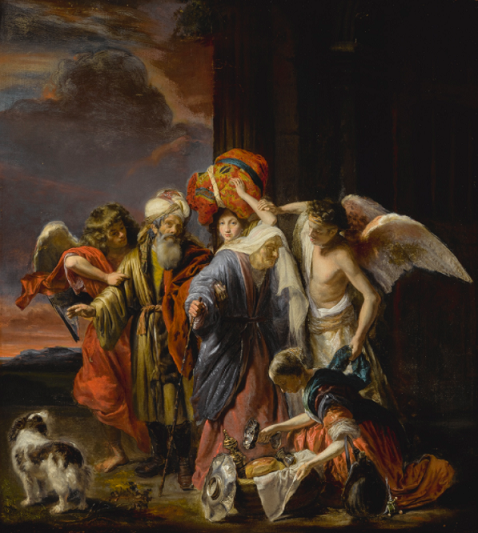 The story of Lot, nephew of Abraham, and his flight from the city of Sodom is told in Genesis (19: 1-28). Two angels, to whom Lot had given hospitality for the night, warned him that God was about to destroy the cities of Sodom and Gomorrah for their sinfulness, and urged him to flee with his wife and two daughters.  The angels warned them not to look behind them as they left  “lest they be consumed.”  Lot’s wife did not heed their advice and, upon looking back, was turned into a pillar of salt.  This painting depicts the moment before this happens, as the angels are seen literally pushing the family along as one daughter frantically gathers food and valuables in a basket, while the other has bundled other belongings in a rug which she carries on her head.  Lot’s wife weeps and pulls away from him as he tries to persuade her to come with them.  Maes touchingly captures the anguish and confusion of the moment. More on this painting

Maes was born in Dordrecht, the son of Gerrit Maes, a prosperous merchant. In about 1648 he went to Amsterdam, where he entered Rembrandt's studio. Before his return to Dordrecht in 1653 Maes painted a few Rembrandtesque genre pictures, with life-size figures and in a deep glowing scheme of colour. So closely did his early style resemble that of Rembrandt, that the last-named picture, and other canvases in the Leipzig and Budapest galleries and in the collection of Lord Radnor, were or are still ascribed to Rembrandt.

In his best period, from 1655 to 1665, Maes devoted himself to domestic genre on a smaller scale, retaining to a great extent the magic of colour he had learnt from Rembrandt. Only on rare occasions did he treat scriptural subjects. His favorite subjects were women spinning, or reading the Bible, or preparing a meal.

While he continued to reside in Dordrecht until 1673, when he settled in Amsterdam, he visited or even lived in Antwerp between 1665 and 1667. His Antwerp period coincides with a complete change in style and subject. He devoted himself almost exclusively to portraiture, and abandoned the intimacy and glowing color harmonies of his earlier work for a careless elegance which suggests the influence of Van Dyck. More on Nicolaes Maes

Giovan Battista Langetti, (1635–1676)
Mary Magdalene at the Foot of the Cross, circa 1670
Oil on canvas
Santa Teresa, Venice

Giovanni Battista Langetti (1625–1676), also known as Giambattista Langetti, was an Italian late-Baroque painter. He was active in his native Genoa, then Rome, and finally for the longest period in Venice.

He first trained with Assereto, then Pietro da Cortona, but afterwards studied under Giovanni Francesco Cassana, appeared in Venice by the 1650s where he worked in a striking Caravaggesque style. He is thought to have influenced Johann Karl Loth and Antonio Zanchi. He painted many historical busts for private patrons in the Venetian territory and in Lombardy. He died at Venice in 1676. More on Giovanni Battista Langetti 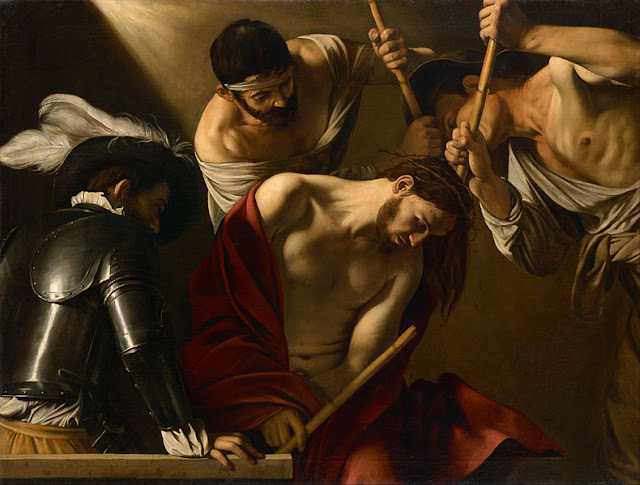 According to three of the canonical Gospels a woven crown of thorns was placed on the head of Jesus during the events leading up to the crucifixion of Jesus. It was one of the instruments of the Passion, employed by Jesus' captors both to cause him pain and to mock his claim of authority.

In later centuries, relics believed by many to be all or part of the Crown of Thorns have been venerated. More on Crown of thorns

Michelangelo Merisi da Caravaggio (29 September 1571 in Caravaggio – 18 July 1610) was an Italian painter active in Rome, Naples, Malta, and Sicily between 1592 and 1610. His paintings, which combine a realistic observation of the human state, both physical and emotional, with a dramatic use of lighting, had a formative influence on Baroque painting.
Caravaggio trained as a painter in Milan under Simone Peterzano who had himself trained under Titian. In his twenties Caravaggio moved to Rome where there was a demand for paintings to fill the many huge new churches and palazzos being built at the time. It was also a period when the Church was searching for a stylistic alternative to Mannerism in religious. Caravaggio's innovation was a radical naturalism that combined close physical observation with a dramatic use of chiaroscuro which came to be known as tenebrism (the shift from light to dark with little intermediate value).
He gained attention in the art scene of Rome in 1600 with the success of his first public commissions, the Martyrdom of Saint Matthew and Calling of Saint Matthew. Thereafter he never lacked commissions or patrons, yet he handled his success poorly. He was jailed on several occasions, vandalized his own apartment, and ultimately had a death sentence pronounced against him by the Pope after killing a young man, possibly unintentionally, on May 29, 1606. He fled from Rome with a price on his head. He was involved in a brawl in Malta in 1608, and another in Naples in 1609. This encounter left him severely injured. A year later, at the age of 38, he died under mysterious circumstances in Porto Ercole in Tuscany, reportedly from a fever while on his way to Rome to receive a pardon.
Famous while he lived, Caravaggio was forgotten almost immediately after his death, and it was only in the 20th century that his importance to the development of Western art was rediscovered. More on Caravaggio 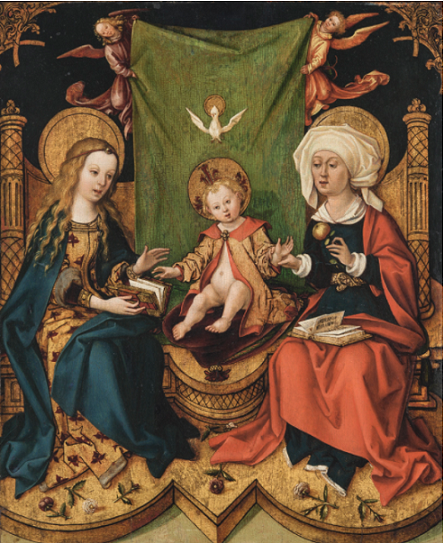 The relationship of St. Anne to the immaculate conception of her daughter is not explicit, but her mystical participation is implied. This should not be confused with the perpetual virginity of Mary or the virgin birth of Jesus. Although the belief was widely held since at least Late Antiquity, the doctrine was not formally proclaimed until December 8, 1854 when it was dogmatically defined in the Western Latin Rite by Pope Pius IX via his papal bull, Ineffabilis Deus. It was never explicitly so in the Eastern churches. More on Saint Anne, the Virgin and the Child Jesus

Hans Holbein the Elder (c. 1460 – 1524) was a German painter. Holbein was born in free imperial city of Augsburg (Germany), and died in Isenheim, Alsace (now France). He belonged to a celebrated family of painters; his father was Michael Holbein; his brother was Sigmund Holbein. He had two sons, both artists and printmakers:

As early as 1493, Holbein had a following, and he worked that year at the abbey at Weingarten, creating the wings of an altarpiece representing Joachim's Offering, the Nativity of the Virgin Mary's Presentation in the Temple, and the Presentation of Christ. Today they hang in separate panels in the cathedral of Augsburg.

Holbein painted richly colored religious works. His later paintings show how he pioneered and led the transformation of German art from the (Late) International Gothic to the Renaissance style. In addition to the altar paintings that are his principal works, he was a woodcut artist, an illustrator of books, and a church window designer; he also made a number of portrait drawings that foreshadow the work of his famous son, Hans Holbein the Younger.

After 1516 Holbein was declared a tax defaulter in Augsburg, which forced him to accept commissions abroad. At Issenheim in Alsace, where Matthias Grünewald was employed at the time, Holbein found patrons and was contracted to complete an altarpiece. His brother Sigismund and others sued him in Augsburg for unpaid debts. Pursued by Augsburg authorities, he fled Issenheim, abandoning his work and equipment, and went to Basel. He died two years later at an unknown location. After 1524 his name no longer appeared on the register of the Augsburg guild. More on Hans Holbein the Elder 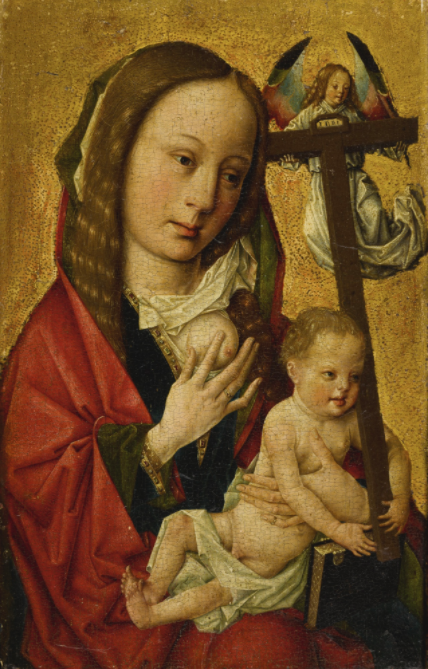 The Virgin, with her high forehead, flowing gold hair, and jewel trimmed robes of red and green reaches towards her bare breast with her right hand and lovingly supports the Christ Child in her lap with her left.  Draped in a soft white garment, he grasps an ornate prayer book in his hands, while a cross, a symbol of his Passion and held aloft by an angel with multi-colored wings, rests against his shoulder.

Such devotional half-length depictions of the Virgin and Child are thought to have been introduced into the Netherlands around 1450 by Rogier van der Weyden, who established an artistic tradition that influenced generations of artists to follow him

That all of the figures in the present work face in one direction towards the right suggest that they very likely once served as the left wing of a small devotional diptych. More on this painting

Flemish painting flourished from the early 15th century until the 17th century. The term does not refer to modern Flanders but to the County of Flanders and neighbouring areas of the Low Countries such as the Tournaisis and Duchy of Brabant which delivered the leading painters in Northern Europe and attracted many promising young painters from other countries. These painters were invited to work at foreign courts and had a Europe-wide influence. Since the end of the Napoleonic era, Flemish painters had again been contributing to a reputation that had been set by the Old Masters. More on the Flemish School

Images are copyright of their respective owners, assignees or others

We do not sell art, art prints, framed posters or reproductions. Ads are shown only to compensate the hosting expenses.