01 Painting, Olympian deities, by the Old Masters, with footnotes #39 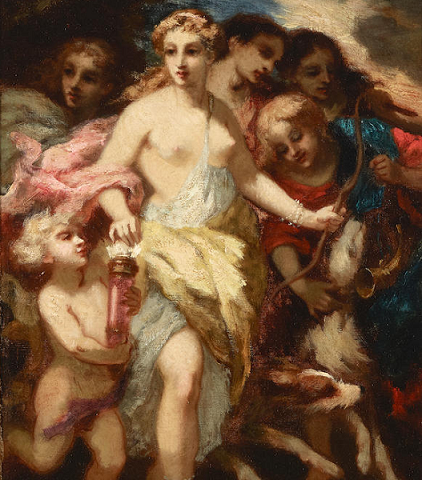 In Roman mythology, Diana was the goddess of the hunt, the moon and nature being associated with wild animals and woodland, and having the power to talk to and control animals. She was eventually equated with the Greek goddess Artemis, though she had an independent origin in Italy. Diana was worshipped in ancient Roman religion and is revered in Roman Neopaganism and Stregheria. Diana was known to be the virgin goddess of childbirth and women. She was one of the three maiden goddesses — along with Minerva and Vesta — who swore never to marry. More on Diane

Narcisse-Virgile Diaz de la Peña, (born 1808, Bordeaux, France—died November 18, 1876, Menton), French painter and lithographer of the group of landscape painters known as the Barbizon school who is distinguished for his numerous Romantic depictions of the forest of Fontainebleau and his landscape fantasies with mythological figures.

At 15 Diaz began working as a ceramic painter for the Sèvres porcelain factory. He studied for a time with the academic painter Alexandre Cabanel. Strongly influenced by Delacroix and the Romantics and attracted by medieval and Middle Eastern art, he often in his early career painted exotic subjects.

About 1840 Diaz began to paint landscapes in the forest of Fontainebleau near the village of Barbizon. These landscapes, which dominated his work for the rest of his career, characteristically have a pervasive sense of the shadowy seclusion of the forest—e.g., Forest Scene (1867). Dense, vividly coloured foliage is broken by spots of light or patches of sky shining through the branches. During the last 15 years of his life Diaz seldom exhibited publicly. He was helpful and sympathetic to the Impressionists, especially Renoir, whom he met in 1861 painting at Barbizon. More on Narcisse-Virgile Diaz de la Peña