01 Works RELIGIOUS ART - Interpretation of the bible, With Footnotes - 126 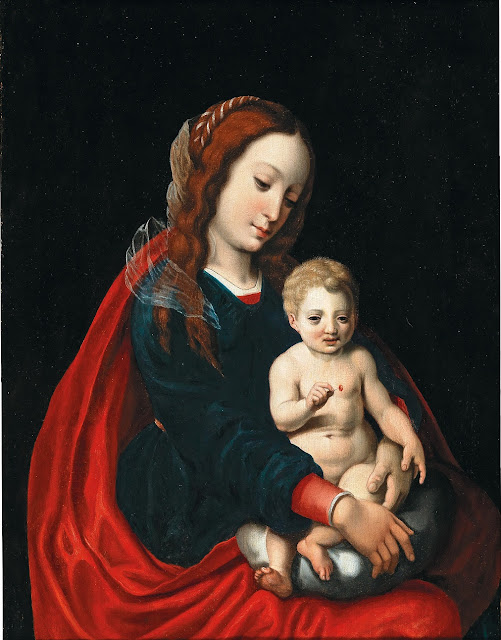 The present Madonna and Child is based on a type developed by Gerard David in the second decade of the sixteenth century, such as in his Madonna and Child at the Musées Royaux des Beaux-Arts in Brussels (inv. no. 3559). The composition spread among the artists of Gerard’s immediate circle and was returned to by the subsequent generation of artists for small devotional paintings. In terms of the figurative style, the present painting is close to the works of Cornelis van Cleve, who may have been familiar with the composition through his father, Joos van Cleve. More on this painting

Early Netherlandish painting is the work of artists active in the Burgundian and Habsburg Netherlands during the 15th- and 16th-century Northern Renaissance; especially in the flourishing cities of Bruges, Ghent, Mechelen, Louvain, Tournai and Brussels, all in contemporary Belgium. Their work follows the International Gothic style and begins approximately with Robert Campin and Jan van Eyck in the early 1420s. It lasts at least until the death of Gerard David in 1523, although many scholars extend it to the start of the Dutch Revolt in 1566 or 1568 Early Netherlandish painting coincides with the Early and High Italian Renaissance but is seen as an independent artistic culture, separate from the Renaissance humanism that characterised developments in Italy. Because these painters represent the culmination of the northern European medieval artistic heritage and the incorporation of Renaissance ideals, they are sometimes categorised as belonging to both the Early Renaissance and Late Gothic. More on the Netherlandish School

Portrait of a Lady, The Orientalist, Art of the Nude and The Canals of Venice, And visit my Boards on Pinterest