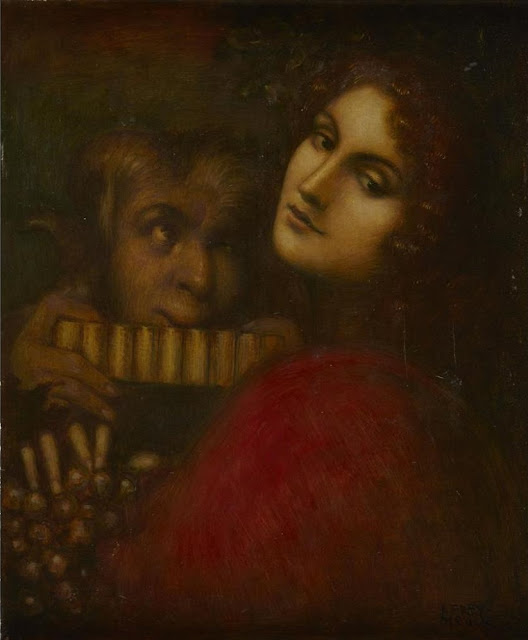 In ancient Greek religion and mythology, Pan is the god of the wild, shepherds and flocks, nature of mountain wilds, rustic music and impromptus, and companion of the nymphs. He has the hindquarters, legs, and horns of a goat, in the same manner as a faun or satyr. With his homeland in rustic Arcadia, he is also recognized as the god of fields, groves, wooded glens and often affiliated with sex; because of this, Pan is connected to fertility and the season of spring. The ancient Greeks also considered Pan to be the god of theatrical criticism. The word panic ultimately derives from the god's name.


In Roman religion and myth, Pan's counterpart was Faunus, a nature god who was the father of Bona Dea, sometimes identified as Fauna; he was also closely associated with Sylvanus, due to their similar relationships with woodlands. In the 18th and 19th centuries, Pan became a significant figure in the Romantic movement of western Europe and also in the 20th-century Neopagan movement. More on Pan

Adolf Frey-Moock came from a farmer family. After the apprenticeship of ecclesiastical fresco painting he studied since October 30, 1904 at the Academy of Fine Arts in Munich with Karl Raupp and Wilhelm von Diez and 1909 assistant to Franz von Stuck in his studio.

In Frey-Moock's works influence of Franz von Stuck and Arnold Böcklin is noticeable. He showed his pictures in the exhibitions of the Munich Artists' Association The Independents . In the 1930s Frey-Moock lived in Nördlingen , then in Munich, and finally returned to Switzerland. More on Adolf Frey-Moock


Please visit my other blogs: Art Collector, Mythology, Marine Art, and The Canals of Venice