01 Work, RELIGIOUS ART - Paintings from the Bible by the Old Masters, 5e 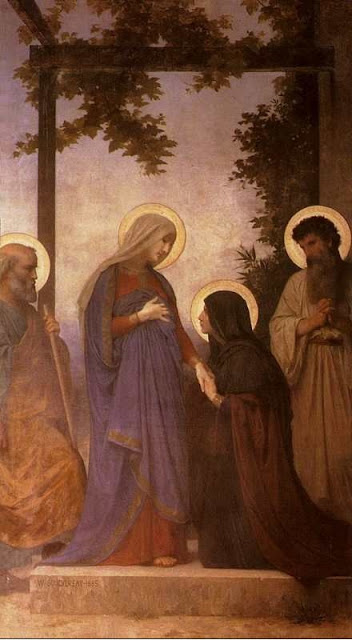 The Visitation. Mary visits her relative Elizabeth; they are both pregnant. Mary is pregnant with Jesus and Elizabeth is pregnant with John the Baptist. Elizabeth was in the sixth month before Mary came. Mary stayed three months, and most scholars hold she stayed for the birth of John. The apparition of the angel, mentioned in Matthew, may have taken place then to end the tormenting doubts of Joseph regarding Mary's maternity.

In Catholicism, it is held that the purpose of this visit was to bring divine grace to both Elizabeth and her unborn child. Even though he was still in his mother's womb, John became aware of the presence of Christ, and leapt for joy as he was cleansed from original sin and filled with divine grace. Elizabeth also responded and recognised the presence of Jesus, and thus Mary exercised her function as mediatrix between God and man for the first time. More on The Visitation


Thank you for visiting my blog and also for liking its posts and pages.