01 Work, RELIGIOUS ART - Interpretation of the bible, With Footnotes - 171 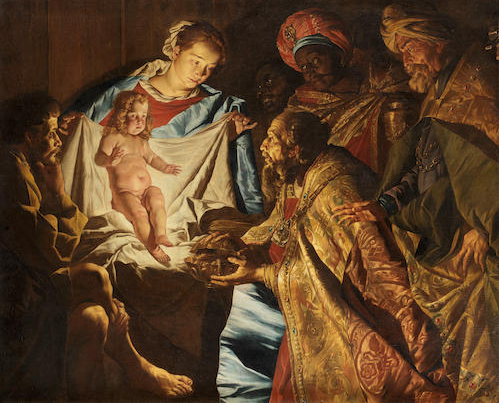 The Adoration of the Magi (anglicized from the Matthean Vulgate Latin section title: A Magis adoratur) is the name traditionally given to the subject in the Nativity of Jesus in art in which the three Magi, represented as kings, especially in the West, having found Jesus by following a star, lay before him gifts of gold, frankincense, and myrrh, and worship him. The Adoration of the Magi

Matthias Stom or Matthias Stomer (c. 1600 – after 1652) was a Dutch golden age painter considered one of the masters of Utrecht Caravaggism. Stom spent most of his artistic life in Italy, and 200 of his works have been preserved. It is conjectured that Stom was born at Amersfoort or in the Utrecht area, but many details of his life are vague. An early mention of Stom was around 1630, when he lived in the same location as Paulus Bor had lived a few years earlier. He was a pupil of Gerard van Honthorst in Rome after 1615.
He remained in Rome until 1632, after which he traveled to Naples, where he stayed until 1640. He then moved to Palermo, and delivered paintings for churches in Caccamo and Monreale. He sold three paintings to Antonio Ruffo, duke of Messina. It is speculated that he died in Sicily, or alternatively in Northern Italy, where in 1652 he painted an altar piece for the church in Chiuduno. More on Matthias Stom