01 Works RELIGIOUS ART - Paintings from the Bible by the Old Masters, 5g 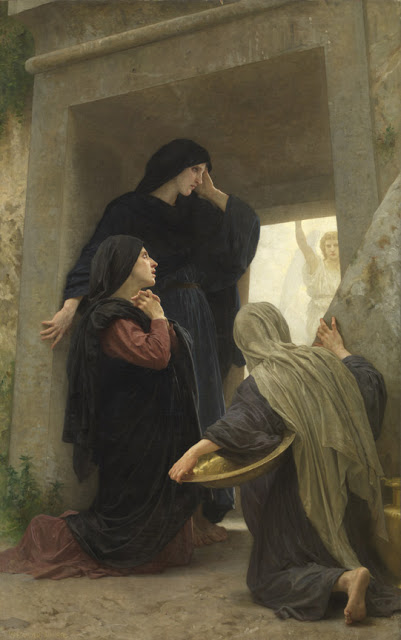 Le Saintes Femmes au Tombeau, 1890, translated to The Holy Women at the Tomb, depicts the three Marys, Mary the Mother of James, Mary Magdalene and Mary of Cleophas, at the tomb of the resurrection. The viewer, compositionally, is placed in a prostrated position and looking up first notices the expressions of bewilderment on the central Mary's face before looking past the three women and into the tomb. The tomb is filled with light and the viewer can only catch a glimpse of the "angel of the resurrection" with his arm raised. This is a very clever arrangement. The viewer feels as though they are there with the Marys and that they have stumbled onto this event, bringing it into the present. This painting was first exhibited at the Paris Salon of 1890, and though a critic after viewing the piece at that time said that Bouguereau "always showed the same thing", the perspective used in this painting and the overall composition is most original and was a tour de force of perspective and foreshortening; which can be clearly seen in the severe angle of the tomb entranceway. The painting now hangs in the collection of the Musée Royal des Beaux-Arts, Antwerp, Belgium. -by Kara Lysandra Ross