01 Painting, Olympian deities, by the Old Masters, NORMAN LINDSAY's Leda and the Swan, with footnotes # 37 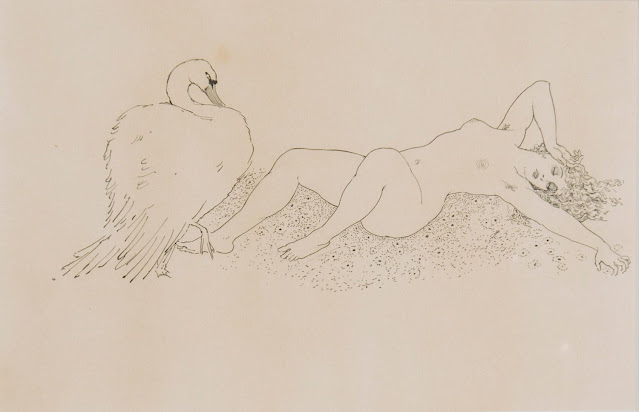 Leda, in Greek legend, usually believed to be the daughter of Thestius, king of Aetolia, and wife of Tyndareus, king of Lacedaemon. She was also believed to have been the mother (by Zeus, who had approached and seduced her in the form of a swan) of the other twin, Pollux, and of Helen, both of whom hatched from eggs. Variant legends gave divine parentage to both the twins and possibly also to Clytemnestra, with all three of them having hatched from the eggs of Leda, while yet other legends say that Leda bore the twins to her mortal husband, Tyndareus. Still other variants say that Leda may have hatched out Helen from an egg laid by the goddess Nemesis, who was similarly approached by Zeus in the form of a swan.The divine swan’s encounter with Leda was a subject depicted by both ancient Greek and Italian Renaissance artists; Leonardo da Vinci undertook a painting (now lost) of the theme, and Correggio’s Leda (c. 1530s) is a well-known treatment of the subject. More Leda and The Swan
Norman Alfred William Lindsay (22 February 1879 – 21 November 1969) was an Australian artist, etcher, sculptor, writer, editorial cartoonist, scale modeller, and an accomplished amateur boxer.
In 1895, Lindsay moved to Melbourne to work on a local magazine with his older brother Lionel. In 1901, he and Lionel, his older brother, joined the staff of the Sydney Bulletin, a weekly newspaper, magazine and review. His association there would last fifty years.
Lindsay travelled to Europe in 1909. In Naples he began 100 pen-and-ink illustrations for Petronius' Satyricon. Visits to the then South Kensington Museum where he made sketches of model ships in the Museum's collection stimulated a lifelong interest in ship models. The Lindsays returned to Australia in 1911.
Lindsay wrote the children's classic The Magic Pudding which was published in 1918. Many of his novels have a frankness and vitality that matches his art. In 1938, Lindsay published Age of Consent.
Cartoons, by Lindsay, were used both for recruitment and to promote conscription during World War I.
Lindsay also worked as an editorial cartoonist, notable for often illustrating the racist and right-wing political leanings that dominated The Bulletin at that time.
Lindsay influenced numerous artists, notably the illustrators Roy Krenkel and Frank Frazetta; he was also good friends with Ernest Moffitt. More on Norman Alfred William Lindsay