01 Work, Interpretation of the Bible! With Footnotes - 35 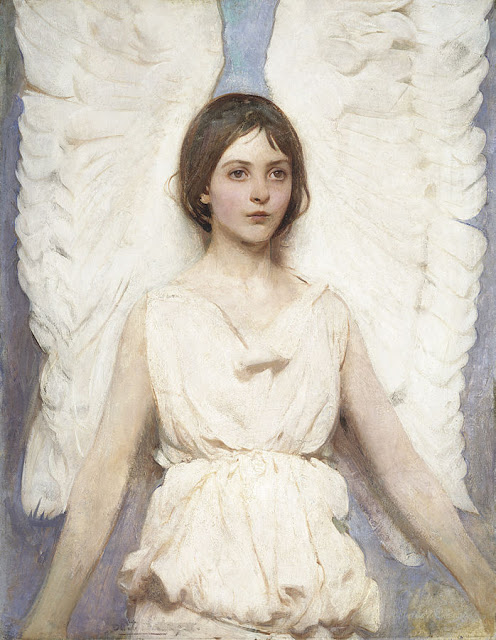 An angel is generally a supernatural being found in various religions and mythologies. In Abrahamic religions and Zoroastrianism, angels are often depicted as benevolent celestial beings who act as intermediaries between God or Heaven and Humanity.[1][2] Other roles of angels include protecting and guiding human beings, and carrying out God's tasks. More on Angels

Abbott Handerson Thayer (August 12, 1849 – May 29, 1921) was an American artist, naturalist and teacher. As a painter of portraits, figures, animals and landscapes, he enjoyed a certain prominence during his lifetime, and his paintings are represented in the major American art collections. He is perhaps best known for his 'angel' paintings, some of which use his children as models.

During the last third of his life, he worked together with his son, Gerald Handerson Thayer, on a book about protective coloration in nature, titled Concealing-Coloration in the Animal Kingdom. First published by Macmillan in 1909, then reissued in 1918, it may have had an effect on military camouflage during World War I. However it was roundly mocked by Theodore Roosevelt and others for its assumption that all animal coloration is cryptic.

Thayer also influenced American art through his efforts as a teacher, training apprentices in his New Hampshire studio. More on Abbott Handerson Thayer