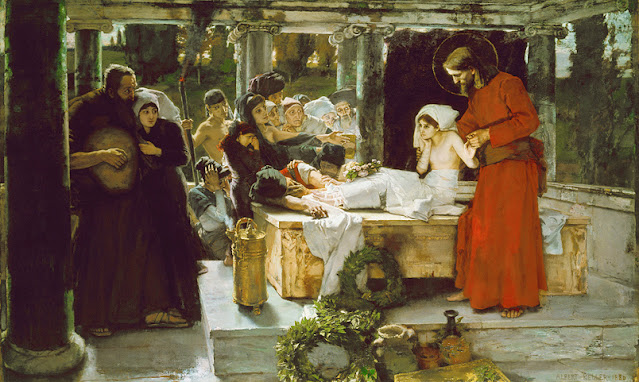 The Raising of Jairus' daughter is a combination of miracles of Jesus in the Gospels.

Jairus, a patron or ruler of a Galilee synagogue, asked Jesus to heal his 12-year-old daughter. Jesus continued to the house, where he "saw a commotion, people weeping and wailing loudly." He informed all those present that the girl was not dead but asleep. He then went upstairs and restored the little girl to life. More on Jairus' daughter 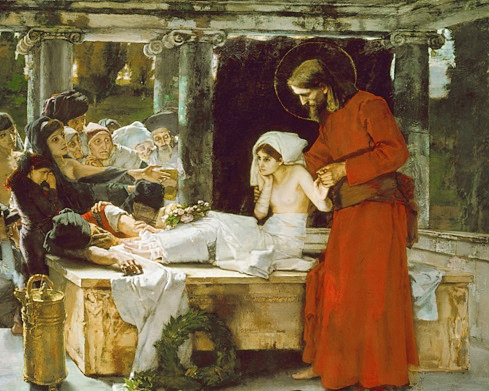 He was one of eight children born to Caroline Keller; who was divorced at the time of his birth. In 1852, his mother became a citizen of Bavaria and, by extension, so did he. Sometime in mid 1854, they relocated to Munich and he was enrolled at the Maximiliansgymnasium [de]. He graduated in 1863 and transferred to Ludwig Maximilian University to study law.

After 1865, he decided to pursue a career in art instead, but spent only a short time at the Academy of Fine Arts. He made numerous study trips throughout Germany, France, Italy and the Low Countries. From 1867 he worked at several different studios throughout Munich. He had his first showing at the Glaspalast in 1869 and became a member of Allotria [de], an artists' association, in 1873.

He exhibited at the Salon for the first time in 1883, while living in Paris. In 1886, he became a member of the new "Munich Psychological Society." Soon he began representing parapsychological motifs, connected to Christian themes, with visions and hallucinations. In 1892, he was one of the co-founders of the Munich Secession and served as Vice President from 1904 to 1920. He was also a board member of the Deutscher Künstlerbund. In 1898, he received the Knight's Cross of the Order of Merit of the Bavarian Crown, which entitled him to use the noble "von" in his name. More on Albert von Keller