01 Work, RELIGIOUS ART - Interpretation of the bible, With Footnotes - 174 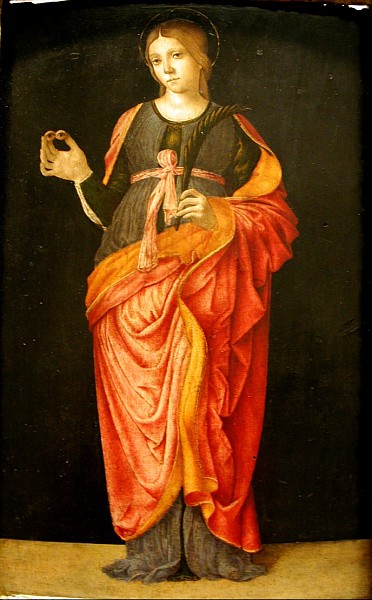 
Saint Lucy, Italian Santa Lucia (died 304, Syracuse, Sicily), virgin and martyr who was one of the earliest Christian saints to achieve popularity, having a widespread following before the 5th century. She is the patron saint of the city of Syracuse (Sicily). Because of various traditions associating her name with light, she came to be thought of as the patron of sight.

Lucy came from a wealthy Sicilian family. Spurning marriage and worldly goods, however, she vowed to remain a virgin in the tradition of St. Agatha. An angry suitor reported her to the local Roman authorities, who sentenced her to be removed to a brothel and forced into prostitution. This order was thwarted, according to legend, by divine intervention; Lucy became immovable and could not be carried away. She was next condemned to death by fire, but she proved impervious to the flames. Finally, her neck was pierced by a sword and she died.

Lucy was a victim of the wave of persecution of Christians that occurred late in the reign of the Roman emperor Diocletian. References to her are found in early Roman sacramentaries and, at Syracuse, in an inscription dating from 400 ce. As evidence of her early fame, two churches are known to have been dedicated to her in Britain before the 8th century, at a time when the land was largely pagan. More Saint Lucy

The emblem of eyes on a cup or plate apparently reflects popular devotion to her as protector of sight. Lucia (from the Latin word "lux" which means "light"). In paintings St. Lucy is frequently shown holding her eyes on a golden plate. She also holds the palm branch, symbol of victory over evil. More The emblem of eyes

Francesco da Cotignola (c. 1475-1532), also called Zaganelli, was an Italian painter of the Renaissance period, active mainly in Parma and Ravenna. He was a pupil of the painter Niccolo Rondinelli. He painted for Basilica of Sant'Apollinare in Classe near Ravenna, Faenza, and Parma. His brother, Bernardino, was also a painter, but nowhere as successful as what Francesco was able to do. He was likely also family of Girolamo Marchesi da Cotignola.

In his native Cotignola he shared his workshop with his brother Bernardino Zaganelli (1499-1519). Their first known joint work is the Madonna and Child Enthroned with Saints John the Baptist and Floriano and Three Angels (1499). Their last is the Holy Family (1509). After the abandonment of his brother, who left the workshop in 1509, Francesco, who until then had worked mainly in tempera, took up new directions by taking an interest in woodcut.

He died in Ravenna in 1532 , leaving the construction of a pictorial cycle unfinished in the Basilica of Sant'Apollinare in Classe . He was buried in the basilica, as he had requested. More on Francesco da Cotignola