01 Work, Interpretation of the bible, With Footnotes - 173 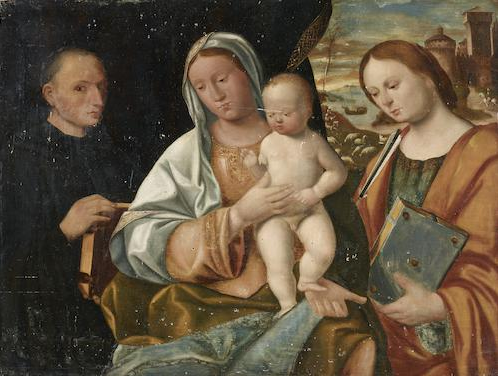 Leonard of Noblac (or of Limoges or Noblet; also known as Lienard, Linhart, Leonhard, Léonard, Leonardo, Annard) (died 559 AD), is a Frankish saint closely associated with the town and abbey of Saint-Léonard-de-Noblat, in Haute-Vienne, in the Limousin (region) of France.

According to unreliable sources, he was a courtier who was converted by St. Remigius, refused the offer of a See from his godfather, King Clovis I, and became a monk at Micy. He lived as a hermit at Limoges and was rewarded by the king with all the land he could ride around on a donkey in a day for his prayers, which were believed to have brought the Queen through a difficult delivery safely. He founded Noblac monastery on the land so granted him, and it grew into the town of Saint-Leonard. He remained there evangelizing the surrounding area until his death. He is invoked by women in labor and by prisoners of war because of the legend that Clovis promised to release every captive Leonard visited. More on Leonard

Saint Ursula (Latin for "little female bear") is a Romano-British Christian saint. Because of the lack of definite information about her and the anonymous group of holy virgins who accompanied her and on some uncertain date were killed at Cologne, they were removed from the Roman Martyrology and their commemoration was omitted from the General Roman Calendar when it was revised in 1969.

Her legend, is that she was a princess who, at the request of her father King Dionotus of Dumnonia in south-west Britain, set sail to join her future husband, the pagan governor Conan Meriadoc of Armorica, along with 11,000 virginal handmaidens. After a miraculous storm brought them over the sea in a single day to a Gaulish port, Ursula declared that before her marriage she would undertake a pan-European pilgrimage. She headed for Rome with her followers and persuaded the Pope, Cyriacus, and Sulpicius, bishop of Ravenna, to join them. After setting out for Cologne, which was being besieged by Huns, all the virgins were beheaded in a massacre. The Huns' leader fatally shot Ursula with a bow and arrow in about 383. More Saint Ursula

Venetian school (art). From the later part of the 15th century, Venice had a distinctive, thriving and influential art scene. Beginning with the work of Giorgione (c. 1477–1510), and the workshop of Giovanni Bellini (c. 1430–1516), major artists of the Venetian school included Titian (1489–1576), Tintoretto (1518–1594), Veronese (1528–1588) and the Bassano (1510–1592). Considered to bring a primacy of color over line, this tradition was seen to contrast with the Mannerism then prevalent in the rest of Italy, and the Venetian style is viewed as having had a great influence on the subsequent development of painting. More on Venetian school