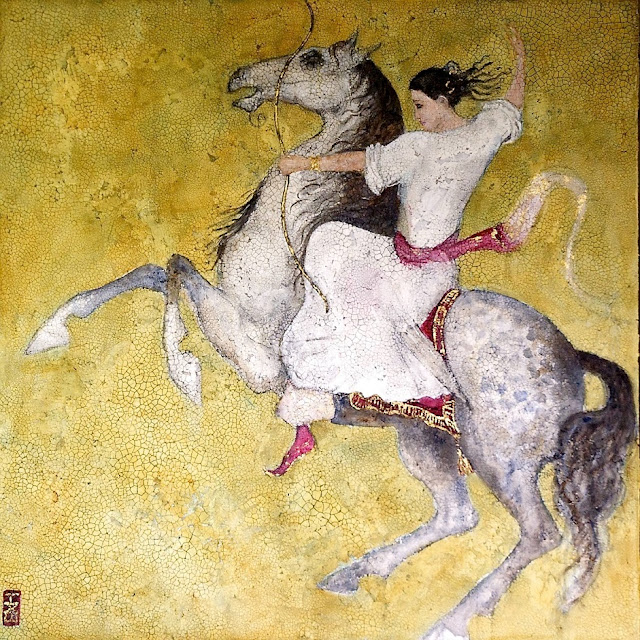 'There is something truly astounding about the way a horse can be transformed from a calm and seemingly domesticated creature, one moment, into an explosion of power and wired emotion, the next. I find this unpredictability and expressiveness, fascinating and a great inspiration in my work. Historical representations of the equine form are another major source of inspiration for me and am particularly interested in the symbolic, mythological and sacred place the horse has held, throughout history.' Ellie Hesse

In Greek mythology, the Amazons were a race of woman warriors.


The legendary Amazons were thought to have lived in Pontus, which is part of modern-day Turkey near the southern shore of the Black Sea. There they formed an independent kingdom under the government of a queen named Hippolyta or Hippolyte. This area is known to have been occupied in the Late Bronze Age by a transhumant group known to the Hittites as the Kaŝka; though they were not directly known to Greeks, modern archaeologists have determined that they finally defeated their enemies, the Hittites, about 1200 BC. According to Plutarch, the Amazons lived in and about the Don river, which the Greeks called the Tanais; but which was called by the Scythians the "Amazon". The Amazons later moved to Terme on the River Thermodon, northern Turkey. More on the Amazons

Ellie Hesse was born in New York in 1972 but spent most of her childhood in the Yorkshire Dales. Travel has always been an important feature of her life since then, exploring Asia and South America, as well as living and working in a number of different European countries.

Entirely self-taught, Ellie is mainly known for her vibrantly coloured townscapes, though in recent years, she has gone on to develop her art to include more figurative work, focusing on the horse in particular. Ellie uses a variety of different media and techniques, depending on the subject matter. The palette knife is her tool of preference for building up layers of texture and depth of colour.

By working intermittently on two very different subjects, Ellie has found that the two approaches seem to cross-pollinate. The looser drawing style of the equine work, feeding into the more structural work of townscapes, bringing new vitality into the painting style as well as composition, with the introduction of figures and animals. The creative tension that arises from contrasting solid, architectural forms with the fluidity of a natural and dynamic subject, creates a certain energy, keeping the painting process always fresh and exciting.. More on Ellie Hesse