04 Works, CONTEMPORARY & 20th Century Interpretation of the Bible! With Footnotes - 32 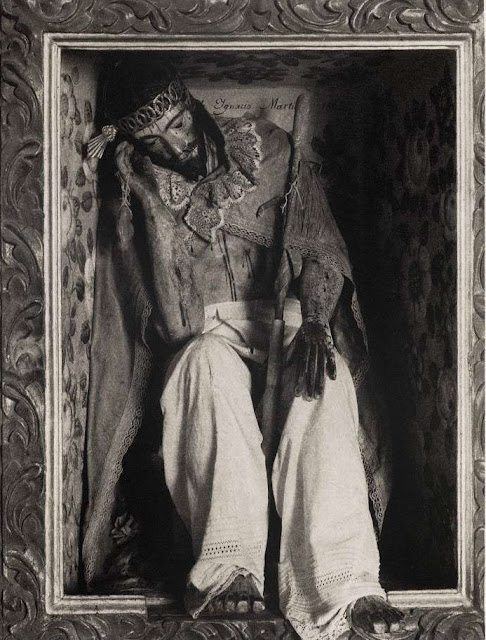 This is a depiction of a sculptural work in a Catholic church in Tlacochoaya, Oaxaca, Mexico. In this tableau, the Christ figure is placed in a framed space that recedes behind him. His feet extend outside of the frame, drawing further attention to the three dimensional aspect of the sculpture. The frame is an ornate wood carving, while the figure of Jesus is also carved from wood. He is fully clothed and painted, wearing a crown, and holding a staff between his legs. He rests his head solemnly to the side, leaning on the left wall of the space in which he sits. The walls and ceiling are covered with a floral pattern, while the back wall contains an inscription. More on this work 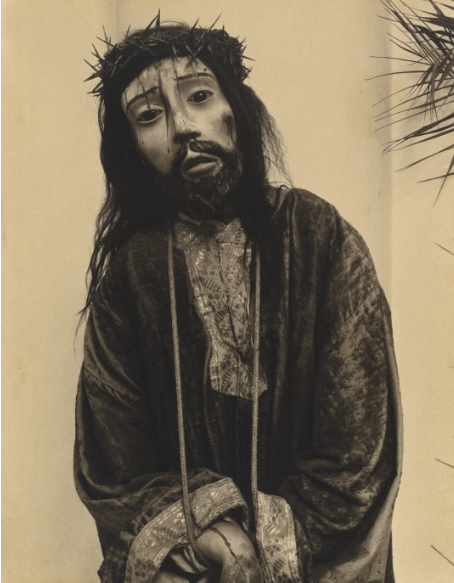 Paul Strand's 1940 portfolio, Photographs of Mexico, included this image of a humble, careworn Christ, outfitted with hair and adorned in velvet. Made outside Mexico City, the painted sculpture constituted a sophisticated example of indigenous craftsmanship. For Strand, the deity was alive with the striving faith of the artisans who created the piece.

By isolating the figure, Strand focused on a topic that was relevant to the contemporary viewer: the working man's daily struggle to attain redemption. More on this work

Ecce homo are the Latin words used by Pontius Pilate in the Vulgate translation of John 19:5, when he presents a scourged Jesus Christ, bound and crowned with thorns, to a hostile crowd shortly before his Crucifixion. The Douay-Rheims Bible translates the phrase into English as "Behold the man!" [John 19:5] The scene has been widely depicted in Christian art. More on Ecce homo 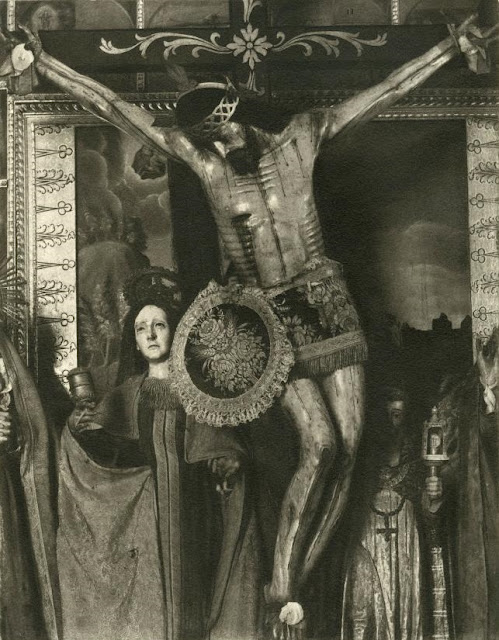 Crucifixion is a historical method of capital punishment in which the victim is tied or nailed to a large wooden beam and left to hang for several days until eventual death from exhaustion and asphyxiation. It is principally known from classical antiquity, but remains in occasional use in some countries.

The crucifixion of Jesus is a central narrative in Christianity, and the cross (sometimes depicting Jesus nailed onto it) is the main religious symbol for many Christian churches. More Crucifixion 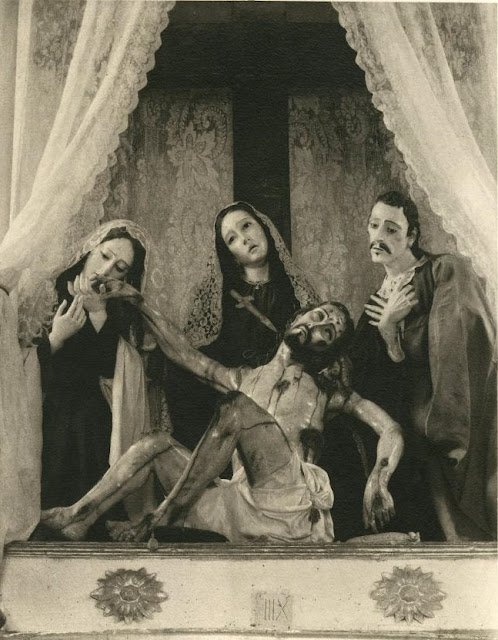 
Other figures not mentioned in the Gospels who are often included in depictions of this subject include St. John the Evangelist, who is sometimes depicted supporting a fainting Mary, and Mary Magdalene. More on the decent from the cross

Paul Strand (October 16, 1890 – March 31, 1976) was an American photographer and filmmaker who, along with fellow modernist photographers like Alfred Stieglitz and Edward Weston, helped establish photography as an art form in the 20th century. His diverse body of work, spanning six decades, covers numerous genres and subjects throughout the Americas, Europe, and Africa. More on Paul Strand