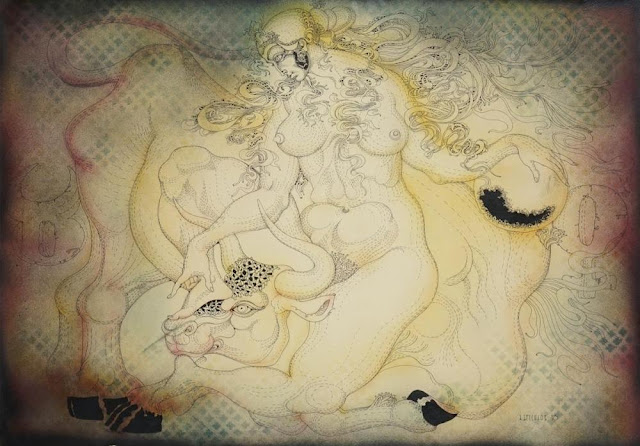 In Greek mythology Europa was the mother of King Minos of Crete, a woman with Phoenician origin of high lineage, and for whom the continent Europe was named. The story of her abduction by Zeus in the form of a white bull was a Cretan story; as classicist Károly Kerényi points out, "most of the love-stories concerning Zeus originated from more ancient tales describing his marriages with goddesses. This can especially be said of the story of Europa".

The mythographers tell that Zeus was enamored of Europa and decided to seduce or ravish her. He transformed himself into a tame white bull and mixed in with her father's herds. While Europa and her helpers were gathering flowers, she saw the bull, caressed his flanks, and eventually got onto his back. Zeus took that opportunity and ran to the sea and swam, with her on his back, to the island of Crete. He then revealed his true identity, and Europa became the first queen of Crete. More on Europa

Anatoly Brusilovsky was born in the family of Rafail Brusilovsky in Odessa in 1932. A graduate of the Kharkov School of Art, his first book illustrations were published in 1953.

In 1957, Brusilovsky took part in the exhibition of young artists held in Moscow as part of the VI International Festival of Young People and Students. In 1960, he moved to Moscow and joined the nonconformist movement.

Brusilovsky became a popular book illustrator in the early 1960s. He collaborated with many journals, and his drawings for Nedelia, Sputnik and Jounost enjoyed great success, particularly with younger readers.

The human bestiary encountered in Brusilovsky’s figurative works is somewhat at odds with his narrative talent. An excellent example is his Human Pantomime cycle.