01 Work, RELIGIOUS ART - Modern Interpretation of the Bible! With Footnotes - #39 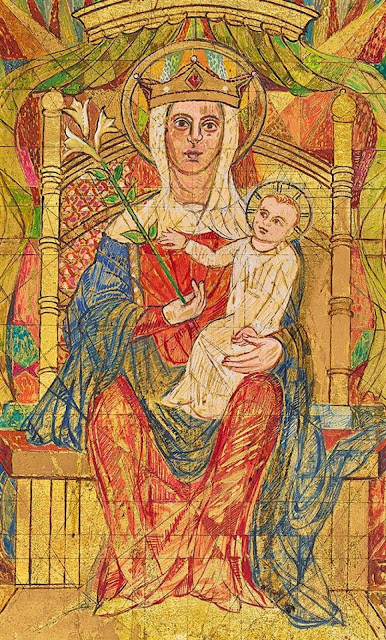 Roy De Maistre CBE (27 March 1894 – 1 March 1968) was an Australian artist of international fame. He is renowned in Australian art for his early experimentation with "colour-music", and is recognised as the first Australian artist to use pure abstraction. His later works were painted in a figurative style generally influenced by Cubism. His Stations of the Cross series hangs in Westminster Cathedral and works of his are hung in the Tate Gallery, London and in the Art Gallery of New South Wales, Sydney.

De Maistre was educated, together with his brothers and sisters, by tutors and governesses at the family home near Sutton Forest. In 1913 he was sent to Sydney to continue his music and art studies. He studied painting at the Royal Art Society of New South Wales. He produced works inspired by reproductions of European post-impressionists. Then he studied under Norman Carter and also at the Julian Ashton Art School in Sydney.

De Maistre developed an interest in "colour-music", his theory of colour harmonisation based on the relationship between colours of the spectrum and notes of the musical scale. With his ordered, analytical mind, he applied the theory of music to his painting.

In 1923 he went to Europe on a travelling Art Scholarship. He spent three years abroad, studying in London, and in France in Paris and Saint-Jean-de-Luz, where he created Sea piece. He also visited Italy, Spain, Belgium, and the Netherlands.

In 1951 he was confirmed in the Roman Catholic faith. Religious subjects began after his conversion. His religious works stemmed from his profound Catholic belief in the truth of the images they represented, and his modern religious pictures were sought for public collections and exhibitions. In 1954 he began painting a series of Stations of the Cross for Westminster Cathedral. More on Roy De Maistre