01 Work, CONTEMPORARY & 20th Century Interpretation of the Bible! With Footnotes - #39 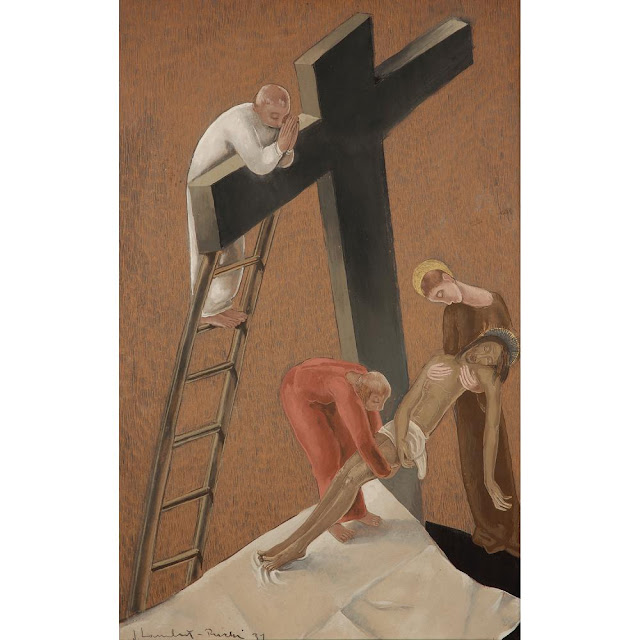 Other figures not mentioned in the Gospels who are often included in depictions of this subject include St. John the Evangelist, who is sometimes depicted supporting a fainting Mary, and Mary Magdalene. The Gospels mention an undefined number of women as watching the crucifixion, including the Three Marys and Mary Salome.  More on Deposition of Christ

Jean Lambert-Rucki (1888–1967), a Polish avant-garde artist, sculptor, and graphic artist, was best known for his participation in the Cubist, Surrealist and Art Deco movements. He exhibited at the 1913 Salon d'Automne in Paris. From 1919 he was represented by both Léonce Rosenberg at the Galerie de l'Effort Moderne and the art dealer Paul Guillaume. In March 1920, Lambert-Rucki exhibited at the second exhibition of la Section d'Or, Galerie de La Boétie, Paris, and participated in the first exhibition of l'Union des Artistes Modernes, where he would continue to show his works. Working in diverse styles and media, at times influenced by the tribal art of Africa, Lambert-Rucki became well known for his Cubist cityscapes. More on Jean Lambert-Rucki

Please note that the content of this post primarily consists of articles available from Wikipedia or other free sources online.
Posted by Henry Zaidan at 4:21 PM