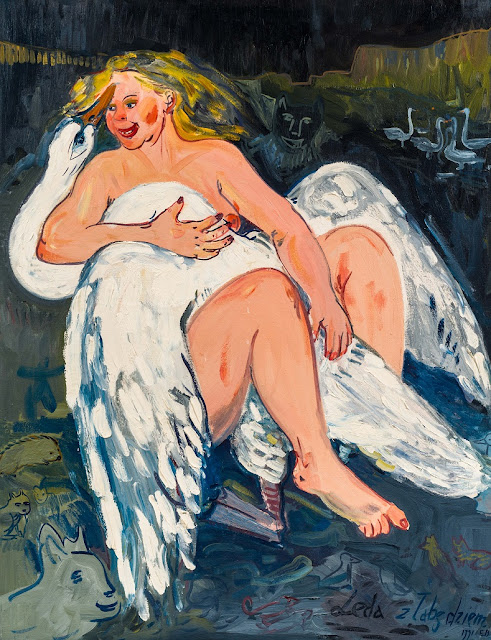 Leda, in Greek legend, usually believed to be the daughter of Thestius, king of Aetolia, and wife of Tyndareus, king of Lacedaemon. She was also believed to have been the mother (by Zeus, who had approached and seduced her in the form of a swan) of the other twin, Pollux, and of Helen, both of whom hatched from eggs. Variant legends gave divine parentage to both the twins and possibly also to Clytemnestra, with all three of them having hatched from the eggs of Leda, while yet other legends say that Leda bore the twins to her mortal husband, Tyndareus. Still other variants say that Leda may have hatched out Helen from an egg laid by the goddess Nemesis, who was similarly approached by Zeus in the form of a swan.The divine swan’s encounter with Leda was a subject depicted by both ancient Greek and Italian Renaissance artists; Leonardo da Vinci undertook a painting (now lost) of the theme, and Correggio’s Leda (c. 1530s) is a well-known treatment of the subject. More Leda and The Swan

From 1963-1970 Edward Dwurnik studied painting, sculpture and graphics at the Academy of Fine Arts in Warsaw. During the first years at the Academy, he thought,  "did not have any vision of his work". After encountering the works of Bernard, Buffett saw new possibilities for painting, but it was only after Nikifor's experience in 1965 that he helped him find a form that would support his own ideas.  An artistic solution, in terms of this problem, was to build multi-element compositions, complications, and create relationships between objects of the image. He painted over 5000 paintings. Dwurnik regularly presented his paintings depicting the capitals of various European Union countries during the Presidency of the European Union held at the Chojnata Palace in Wola Chojnata.