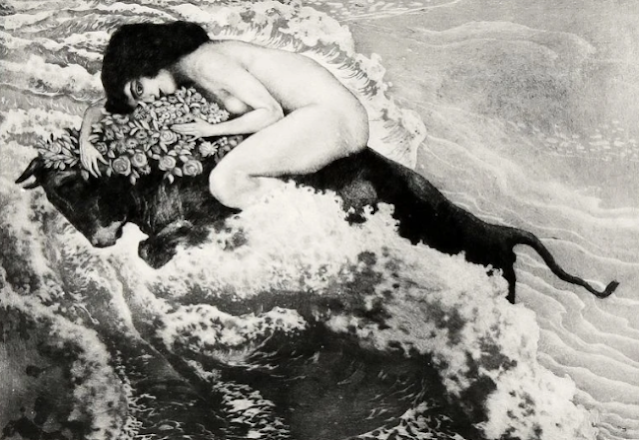 Luigi Bonazza
EUROPA, 1908
Halftone on steel
Prints & Graphic Art
225x330mm. 353x498mm
Private collection
In Greek mythology Europa was the mother of King Minos of Crete, a woman with Phoenician origin of high lineage, and for whom the continent Europe was named. The story of her abduction by Zeus in the form of a white bull was a Cretan story; as classicist Károly Kerényi points out, "most of the love-stories concerning Zeus originated from more ancient tales describing his marriages with goddesses. This can especially be said of the story of Europa".
The mythographers tell that Zeus was enamored of Europa and decided to seduce or ravish her. He transformed himself into a tame white bull and mixed in with her father's herds. While Europa and her helpers were gathering flowers, she saw the bull, caressed his flanks, and eventually got onto his back. Zeus took that opportunity and ran to the sea and swam, with her on his back, to the island of Crete. He then revealed his true identity, and Europa became the first queen of Crete. More on Europa
Luigi Bonazza was born in 1877 in Arco, in the province of Trento. Between 1893 and 1897 he studied with Luigi Comel at the Elisabettina Royal School of Rovereto . In 1897 he moved to Vienna where he enrolled in the Kunstgewerbeschule . He studied painting with Felician von Myrbach and Franz von Matsch and came into contact with the secessions. In 1904 he won a competition for the creation of a poster for the Tridentine Alpinists Society.
In 1912 he returned to Trento where, together with other artists, he founded the Trentino Artistic Circle. Between 1914 and the 1940s he decorated his home, remodeling it according to Viennese artistic ideals. To avoid enlisting in the army of the Austro-Hungarian Empire he fled to Italy: between 1916 and 1918 he lived in Vizzola Ticino , near Milan . Here he works for Gianni Caproni making watercolors and engravings on flight. He returned to Trento in 1918 with the end of the First World War . Later he painted mainly landscapes and portraits . In 1925 he signed the Manifesto of Fascist intellectuals . Between 1932 and 1933 he decorated the Palazzo delle Poste in Trento . He lived for a period in Torbole sul Garda , but during the Second World War he remained in Trento despite the bombings until 1944 , when he moved to Bosentino . After the war he returned to Trento, but in the 1950s he had to stop painting due to a deterioration in his vision . He died in 1965. More on Luigi Bonazza