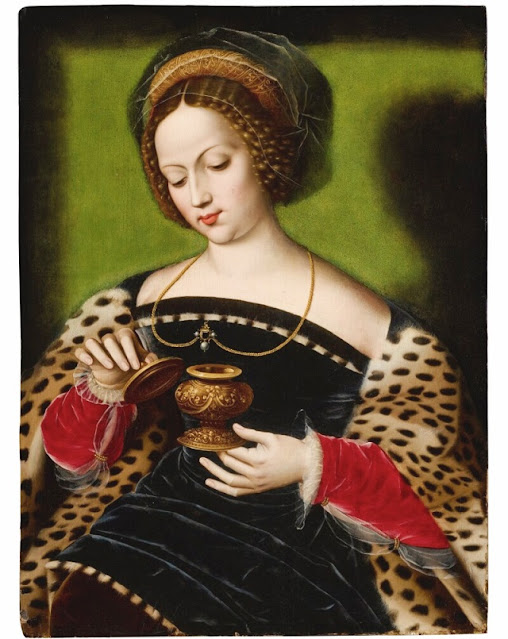 Ambrosius Benson, Lombardy (?) late 15th century - before 1550 Bruges
Mary Magdalene holding an ointment jar
Oil on panel
27 by 19 1/2 in.; 68.6 by 49.5 cm.
Private collection
The Magdalene in this painting is more the elegant grand dame of her day than penitent saint. Her beautiful figure derives from one of the sibyls in Benson’s Deipara Virgo (Koninklijk Museum voor Schone Kunsten, Antwerp). The design was evidently very popular as Benson used it on several occasions as a single sibyl, or as the Magdalene, either holding an ointment jar, as in this painting, or reading (See below). More on this painting 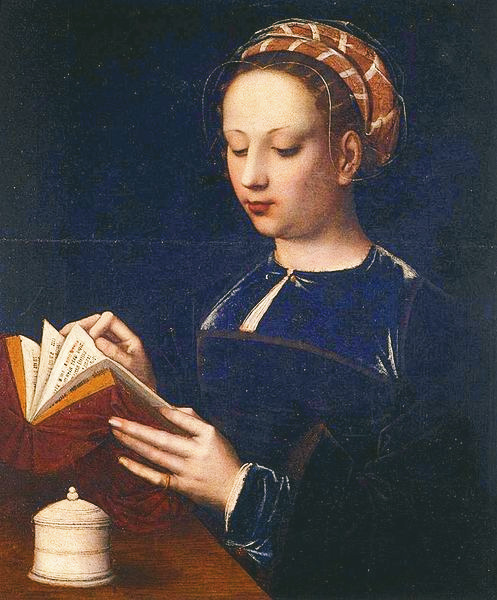 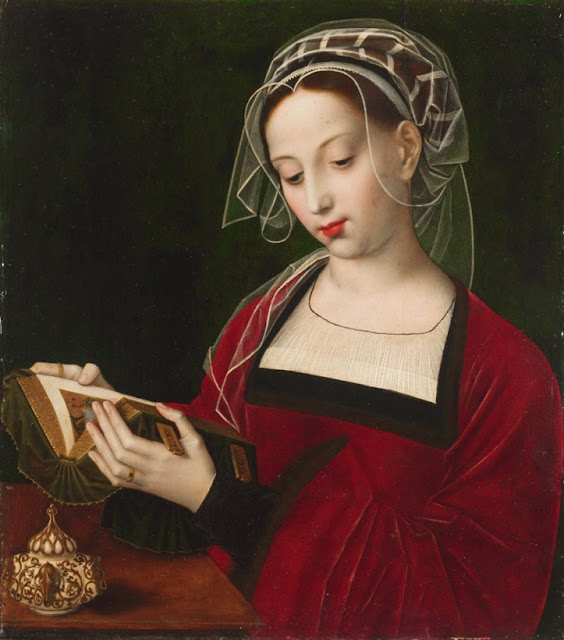 Ambrosius Benson  (circa 1495 –1550)
The Magdalen Reading. ca. 1525
Oil on oak wood
National Gallery, London
Mary Magdalene,  literally translated as Mary the Magdalene or Mary of Magdala, is a figure in Christianity who, according to the Bible, traveled with Jesus as one of his followers. She is said to have witnessed Jesus' crucifixion and resurrection. Within the four Gospels she is named more than most of the apostles. Based on texts of the early Christian era in the third century, it seems that her status as an “apostle" rivals even Peter's.
The Gospel of Luke says seven demons had gone out of her. She is most prominent in the narrative of the crucifixion of Jesus, at which she was present. She was also present two days later when, she was, either alone or as a member of a group of women, the first to testify to the resurrection of Jesus. John 20 and Mark 16:9 specifically name her as the first person to see Jesus after his resurrection.
During the Middle Ages, Mary Magdalene was regarded in Western Christianity as a repentant prostitute or promiscuous woman, claims not found in any of the four canonical gospels. More Mary Magdalene
Ambrosius Benson (c. 1495/1500, in Ferrara or Milan] – 1550, in Flanders) was an Italian painter who became a part of the Northern Renaissance.
While many surviving paintings have been attributed, there is very little known of him from records, and he tended not to sign his work. He is believed to be responsible for mainly religious art, but also painted portraits on commission. He sometime painted from classical sources, often setting the figures in modern-dress, or a contemporary domestic setting. In his lifetime he was successful; he had a large workshop, his work was sold internationally and he was especially popular in Spain.
Benson became popular as a source for pastiche with 19th-century painters, who are sometimes known as the "followers of Benson". In particular his many variations of the Magdalen and Sibilla Persica were further copied and became popular with contemporary buyers. Many have retained their relative value and held in the National Gallery, London and command high prices at Sotheby's. More on Ambrosius Benson