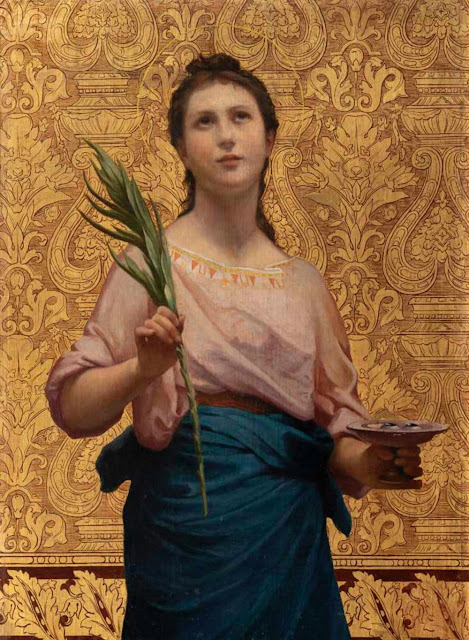 The emblem of eyes on a cup or plate apparently reflects popular devotion to her as protector of sight. In paintings St. Lucy is frequently shown holding her eyes on a golden plate. She also holds the palm branch, symbol of victory over evil. More The emblem of eyes

Saint Lucy, Italian Santa Lucia (died 304, Syracuse, Sicily), virgin and martyr who was one of the earliest Christian saints to achieve popularity, having a widespread following before the 5th century. She is the patron saint of the city of Syracuse (Sicily). Because of various traditions associating her name with light, she came to be thought of as the patron of sight.

Lucy came from a wealthy Sicilian family. Spurning marriage and worldly goods, however, she vowed to remain a virgin in the tradition of St. Agatha. An angry suitor reported her to the local Roman authorities, who sentenced her to be removed to a brothel and forced into prostitution. This order was thwarted, according to legend, by divine intervention; Lucy became immovable and could not be carried away. She was next condemned to death by fire, but she proved impervious to the flames. Finally, her neck was pierced by a sword and she died.

Lucy was a victim of the wave of persecution of Christians that occurred late in the reign of the Roman emperor Diocletian. References to her are found in early Roman sacramentaries and, at Syracuse, in an inscription dating from 400 ce. As evidence of her early fame, two churches are known to have been dedicated to her in Britain before the 8th century, at a time when the land was largely pagan. More Saint Lucy

Gabriel Cornelius Ritter von Max (ennobled in 1900; 23 August 1840 – 24 November 1915) was a Prague-born Austrian painter, the son of the sculptor Josef Max and Anna Schumann. He studied at the Prague Academy of Arts. His studies included parapsychology, Darwinism, Asiatic philosophy, the ideas of Schopenhauer, and various mystical traditions. He continued his studies at the Viennese Academy of Art. From 1863 to 1867 he studied at the Munich Academy. His first critical success was in 1867 with the painting "Martyr at the Cross": that painting transformed the "Unglücksmalerei" (dark palette) of Piloty into a religious-mystical symbolism using a psychological rendering of its subject.

He continued to use the dark palette of the Piloty school well into the 1870s, later moving toward a more muted palette, using fewer, clearer colors. From 1869, Gabriel von Max had his studio in Munich. From 1879-1883, Gabriel Max was a professor of Historical Painting at the Munich Academy; he also became a Fellow of The Theosophical Society. In 1900 he was ennobled and became a Ritter. He died in Munich in 1915. More Gabriel von Max