01 Paintings from Norse mythology, with footnotes - #3 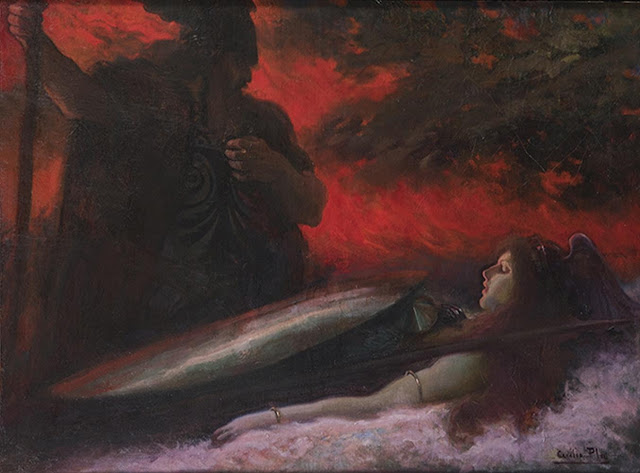 In Norse mythology the Valkyries are 'choosers of the slain,' and they are the daughters of
Wotan or Odin.

Brunhilde who is Wotan's favourite, defies Odin and was punished by imprisonment within a ring of fire until a brave hero falls in love and rescues her. More on Brunilda and Wotan

Brunhild, also known as Brunhilda or Brynhild, is a powerful female figure from Germanic heroic legends. She may have her origins in the Visigothic princess Brunhilda of Austrasia.

In the Norse tradition, Brunhild is a shieldmaiden or valkyrie, who appears as a main character in the Völsunga saga and some Eddic poems treating the same events. In the continental Germanic tradition, where she is a central character in the Nibelungenlied, she is a powerful Amazon-like queen. In both traditions, she is instrumental in bringing about the death of the hero Sigurd or Siegfried after he deceives her into marrying the Burgundian king Gunther or Gunnar. In both traditions, the immediate cause for her desire to have Sigurd murdered is a quarrel with the hero's wife. More on Brunilda

Wōtan is the Old High German name of the Germanic god Odin; a widely revered god in Germanic mythology. In Norse mythology, from which stems most surviving information about the god, Odin is associated with wisdom, healing, death, royalty, the gallows, knowledge, war, battle, victory, sorcery, poetry, frenzy, and the runic alphabet, and is the husband of the goddess Frigg.

Odin was known in Old English as Wōden, in Old Saxon as Wōdan, and in Old High German as Wuotan. More on Odin

Cecilio Plá y Gallardo (22 November 1860 – 4 August 1934) was a Spanish painter and illustrator, born in Valencia. As a child, he studied music at the Escuela de Artesanos de Valencia, in accordance with the wishes of his father. Later, he followed his own desires to be an artist and continued his studies at the Instituto San Pablo and the Real Academia de Bellas Artes de San Carlos. After winning a Silver Medal at the Exposición de Valencia in 1879, he moved to Madrid with a friend, where he entered the Real Academia de Bellas Artes de San Fernando, becoming a student of Emilio Sala.

The following year, after travelling through Portugal, France and Italy, he settled in Rome. From there, he sent home numerous works which showed the influence of Marià Fortuny. Some were shown at the National Exhibition of Fine Arts, winning medals in 1884 and 1887 for paintings on Italian subjects. He received many more medals.

In 1910, he began his career as a teacher at the Academy of San Fernando, a position he held until his retirement in 1931. He was named an Academician in 1924. His dedication to teaching drastically reduced his artistic output.