01 Works, RELIGIOUS ART - Interpretation of the bible, With Footnotes - 127 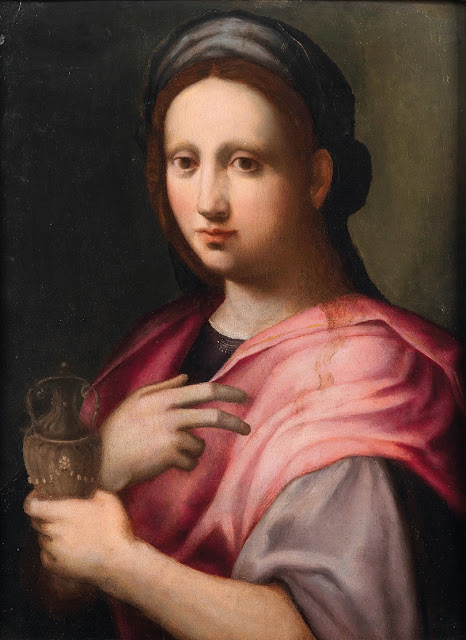 Mary Magdalene was a Jewish woman who, according to texts included in the New Testament, traveled with Jesus as one of his followers. She is said to have witnessed Jesus' crucifixion and resurrection. Based on texts of the early Christian era in the third century, it seems that her status as an “apostle" rivals even Peter's.

She is most prominent in the narrative of the crucifixion of Jesus, at which she was present. She was also present two days later, either alone or as a member of a group of women, the first to testify to the resurrection of Jesus.

Ideas that go beyond the gospel presentation of Mary Magdalene as a prominent representative of the women who followed Jesus have been put forward over the centuries.

During the Middle Ages, Mary Magdalene was regarded in Western Christianity as a repentant prostitute or promiscuous woman, claims not found in any of the four canonical gospels. More Mary Magdalene

Domenico Puligo (1492–1527) was an Italian painter of the Renaissance, active in Florence. His real name was Domenico di Bartolomeo Ubaldini.

He trained under Ridolfo Ghirlandaio and acted as an assistant to Andrea del Sarto, whom he also became close friends with. Both Ghirlandaio and Sarto exerted heavy influences over Puligo that are evident in his works and style of painting. Puglio was also influenced by Jacopo Pontormo and Il Rosso. He rose to success as a portrait artist and was in high demand in Florence. His most renowned piece is possibly the large scale Vision of Saint Bernard altarpiece, now located in the Walters Art Gallery in Baltimore. Some of his early works include the Virgin and Child with St. John as well as the Holy Family. About a dozen drawings are also attributed to Puligo. He is featured in Giorgio Vasari's Vite or Lives of the Artists. According to Vasari, Puligo was a particularly idle artist, which may explain the paucity of his productions. His brother, Jacone Puligo, was also a Renaissance painter. More on Domenico Puligo