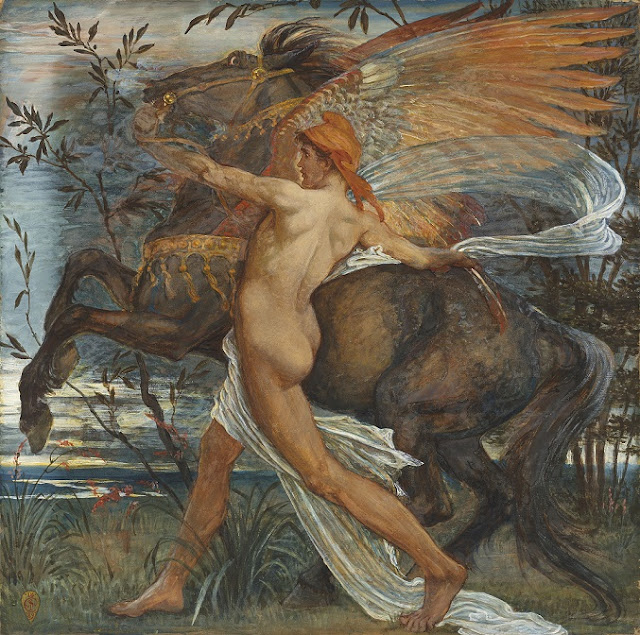 Walter Crane, R.W.S. (1845-1915)
Pegasus, c. 1889
Pencil, watercolour and bodycolour with gum arabic on paper laid on linen
28 x 28 in. (71 x 71 cm.)
Private collection
Pegasus, in Greek mythology, a winged horse that sprang from the blood of the Gorgon Medusa as she was beheaded by the hero Perseus. With Athena’s (or Poseidon’s) help, another Greek hero, Bellerophon, captured Pegasus and rode him first in his fight with the Chimera and later while he was taking vengeance on Stheneboea (Anteia), who had falsely accused Bellerophon. Subsequently Bellerophon attempted to fly with Pegasus to heaven but was unseated and killed or, by some accounts, lamed. The winged horse became a constellation and the servant of Zeus. The spring Hippocrene on Mount Helicon was believed to have been created when the hoof of Pegasus struck a rock. More on Pegasus

Walter Crane (15 August 1845 – 14 March 1915) was an English artist and book illustrator. He is considered to be the most influential, and among the most prolific, children’s book creator of his generation and, along with Randolph Caldecott and Kate Greenaway, one of the strongest contributors to the child's nursery motif that the genre of English children's illustrated literature would exhibit in its developmental stages in the latter 19th century.
Crane's work featured some of the more colourful and detailed beginnings of the child-in-the-garden motifs that would characterize many nursery rhymes and children's stories for decades to come. He was part of the Arts and Crafts movement and produced an array of paintings, illustrations, children's books, ceramic tiles and other decorative arts. Crane is also remembered for his creation of a number of iconic images associated with the international Socialist movement. More on Walter Crane