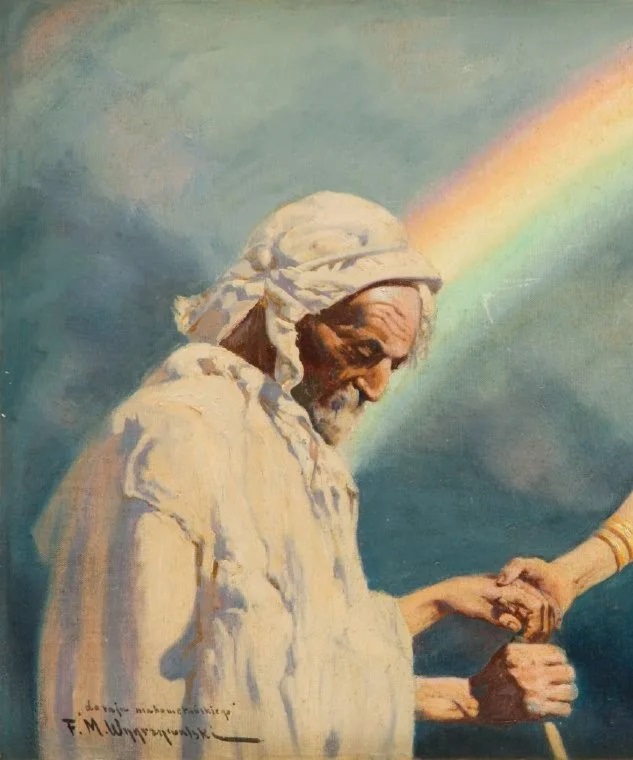 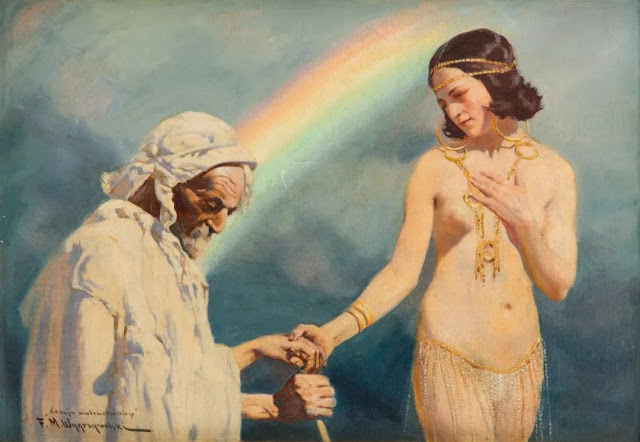 Feliks Michal Wygrzywalski (1875 - 1944)
To Mohammedan paradise
Oil on cardboard, 50 x 70 cm
50 x 70 cm
Private collection
The Koran has for its subject matter death, resurrection, judgment, paradise, and hell. The joys of paradise are designed to satisfy fundamental desires in man. All who die for the cause of their religion go to paradise. This Mohammedan paradise is made delightful by beautiful black- eyed maidens (houris) not made of common clay. They are free from all blemishes; they are full of eternal virtue and beauty. They await the souls of believers in rosy bowers set in the hollow of giant pearls. The soil of paradise is perfumed and sprinkled with gold and silver and flowers. The fruits of the trees are of a taste unknown to mortals. Numerous rivers flow through paradise; some are of wine; others are of milk and honey. The riverbeds and riverbanks are full of emeralds, diamonds, and rubies. The meanest of believers will have 80000 servants and 72 wives. At whatever age a Mohammedan dies, his resurrection in paradise, he will be restored to manly vigor and eternal health. It would take a journey of a thousand years for a true believer to travel through paradise and see all the wives, servants, gardens, jewelry, robes, houses, camels, and other things that are exclusively his. More on the Mohammedan paradise 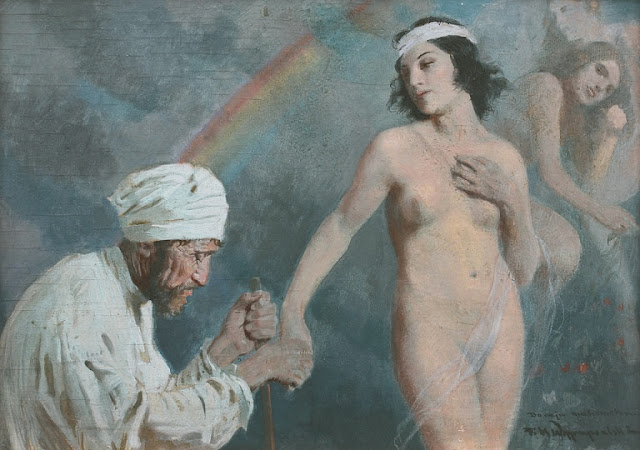 Thanks to a scholarship from the Malinowski Foundation, he was able to study at the Academy of Fine Arts Munich from 1893 to 1898. This was followed by some time at the Académie Julian in Paris and a study trip to Italy.

In 1900, he decided to settle in Rome. His studies there consisted largely of copying the Old Masters, but he also created landscapes and nudes. Later, he provided illustrations for the Polish travel magazine, Wędrowiec (The Wanderer), as well as magazines in Germany and Russia.

In 1906, he visited Egypt, creating numerous paintings and sketches for later use. When he came back to Poland in 1908, he lived in Lwów, where he had been commissioned to paint murals at the Chamber of Commerce and Industry. He also did some stage designs. During World War I, he moved to Rostov-on-Don and became a drawing professor. He returned to Lwów when the war was over.

He was a frequent participant in exhibitions, but his first personal showing came only in 1932, at the local "Society of Friends of the Fine Arts". During this period, his major work was a series of fourteen paintings, depicting the history of dance. For most of his later life, he maintained his own art salon in Lwów. During the post-war depression, many upper-class people sold their paintings there; often entire collections.

In July 1944, at the approach of the Red Army, he was forced to flee Lwów, leaving all of his possessions behind. He found refuge at a tenement house in Rzeszów, but died only a few months later, from a stroke; possibly the result of an injury he suffered while fleeing. He was buried at the local cemetery, but his grave has not survived. More on Feliks Michał Wygrzywalski