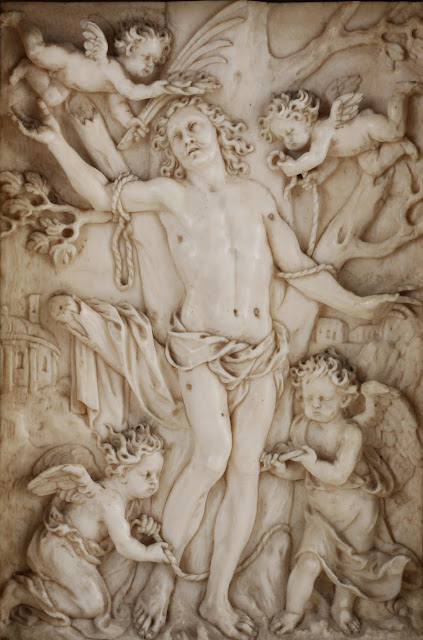 17th century carved ivory relief depicting St. Sebastian being released from the tree. According to tradition, he was rescued by Irene of Rome. In this unusual depiction, he is shown being untied by cherubs. His body shows several puncture marks from the arrows that were shot into him. 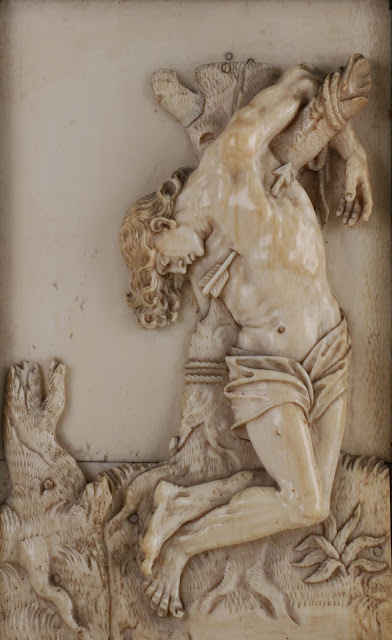 17th century carved ivory relief depicting St. Sebastian tied to a tree, with an arrow in his chest. According to tradition, he was rescued by Irene of Rome (later condemned by Diocletian to be clubbed to death).

Saint Sebastian (died c. 288 AD) was an early Christian saint and martyr. Sebastian had prudently concealed his faith, but in 286 was detected. Diocletian reproached him for his betrayal, and he commanded him to be led to a field and there to be bound to a stake so that archers from Mauritania would shoot arrows at him. "And the archers shot at him till he was as full of arrows as an urchin is full of pricks, and thus left him there for dead." Miraculously, the arrows did not kill him.

Sebastian later stood by a staircase where the emperor was to pass and harangued Diocletian for his cruelties against Christians. This freedom of speech, and from a person whom he supposed to have been dead, greatly astonished the emperor; but, recovering from his surprise, he gave orders for his being seized and beat to death with cudgels, and his body thrown into the common sewer. A pious lady, called Lucina, admonished by the martyr in a vision, got it privately removed, and buried it in the catacombs at the entrance of the cemetery of Calixtus, where now stands the Basilica of St. Sebastian. More St. Sebastian

Please note that the content of this post primarily consists of articles available from Wikipedia or other free sources online.
Posted by Henry Zaidan at 4:43 PM