02 Works, 20th Century Interpretation of the Bible! With Footnotes - 37 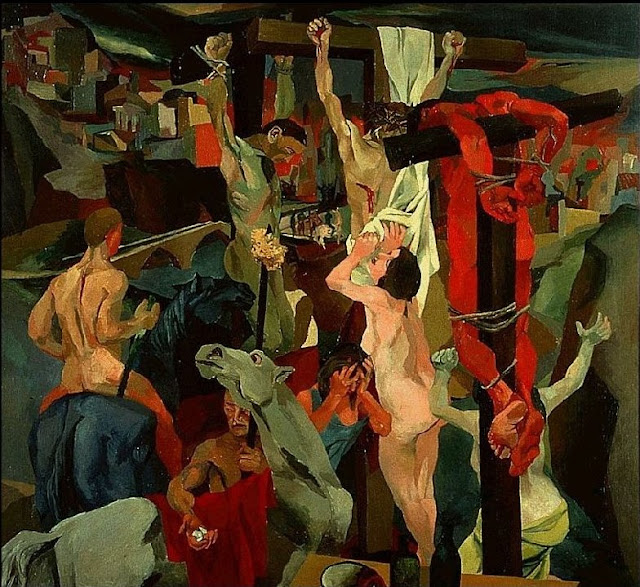 Crocifissione is the painting for which Renato Guttuso is best remembered. At the time it was derided by the clergy, who labelled Guttuso a "pictor diabolicus" ("a devilish painter"). The fascists also denounced it for depicting the horrors of war under a religious cover. Guttuso wrote in his diary: "it is the symbol of all those who endure insults, jail, torture for their ideas". Guttuso also spoke publicly about "The Crocifissione", saying "this is a time of war. I wish to paint the torment of Christ as a contemporary scene... as a symbol of all those who, because of their ideas, endure outrage, imprisonment and torment"

Renato Guttuso (26 December 1912 – 18 January 1987) was an Italian painter. His best-known works include Flight from Etna (1938–39), Crucifixion (1941) and La Vucciria (1974). Guttuso also designed for the theatre and did illustrations for books. Those for Elizabeth David’s Italian Food (1954), introduced him to many in the English-speaking world. A fierce anti-Fascist, "he developed out of Expressionism and the harsh light of his native land to paint landscapes and social commentary."

He was born in Bagheria, near Palermo in Sicily, but from 1937 lived and worked largely in Rome. In his youth he joined the Gruppo universitario fascista, but later he became an anti-fascist and atheist. He joined the banned Italian Communist Party (PCI) in 1940 and left Rome to become an active participant in the partisan struggle from 1943. He was also an opponent to the Mafia. In 1972 Guttuso was awarded the Lenin Peace Prize. In 1976 he was elected to the Italian Senate as a PCI representative for the Sicilian constituency of Sciacca.

Guttuso became a member of an artistic movement named "Corrente". The movement stood for free and open attitudes, in opposition to the official culture, and chose a strong anti-fascist position in thematic choices through the years of the Spanish Civil War.

Mimise Dotti-Guttuso died on 6 October 1986. Guttuso was soon to follow his wife. He died in Rome of lung cancer at the age of 75 on 18 January 1987. On his deathbed, he allegedly embraced again the Christian faith with which he had been critical. However, there are doubts as to what really happened—in his last months, when he was bedridden, a circle of politicians and priests excluded his oldest friends from his villa. He donated many of his works to his hometown Bagheria, which are now housed in the museum of the Villa Cattolica. More on Renato Guttuso