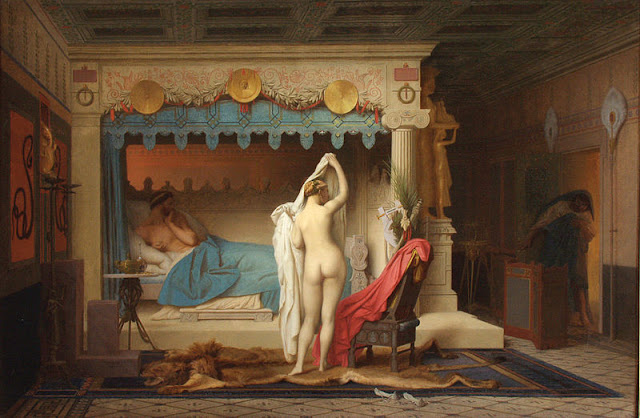 Jean-Léon Gérôme (11 May 1824 – 10 January 1904) was a French painter and sculptor in the style now known as Academicism. The range of his oeuvre included historical painting, Greek mythology, Orientalism, portraits and other subjects, bringing the Academic painting tradition to an artistic climax. He is considered one of the most important painters from this academic period, and in addition to being a painter, he was also a teacher with a long list of students. More on Jean-Léon Gérôme

According to Herodotus, Candaules believed his wife, Nyssia, to be the most beautiful woman on Earth.
Candaules often told his favourite bodyguard, Gyges, how beautiful the queen was and, thinking Gyges did not believe him, urged Gyges to contrive to see her naked. Gyges initially refused as he did not wish to dishonor the queen. Nevertheless, Candaules was insistent and Gyges had no option but to obey his king. So Gyges hid in Candaules' bedroom and, when the queen entered, watched her undress. As she was getting into bed, he quietly left the room, but the queen saw him and realised what had happened. 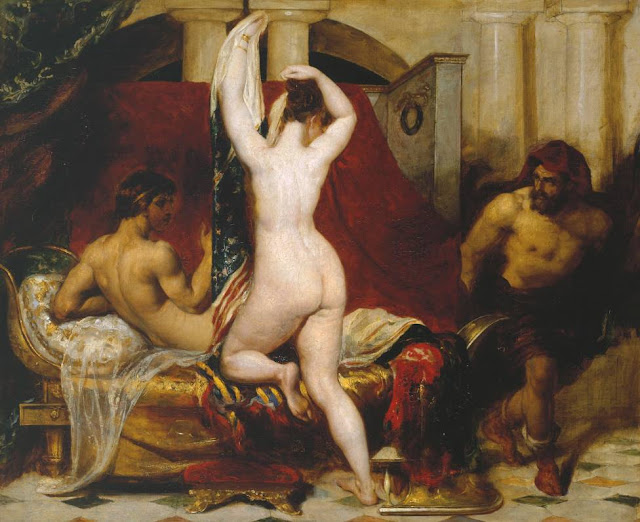 William Etty, (1787–1849)Candaules, King of Lydia, Shews his Wife by Stealth to Gyges, One of his Ministers, As She Goes to Bed, c. 1830Oil on canvasHeight: 45.1 cm (17.7 ″); Width: 55.9 cm (22 ″)Tate Britain
William Etty RA (10 March 1787 – 13 November 1849) was an English artist best known for his history paintings containing nude figures. He was the first significant British painter of nudes and still lifes. Born in York, he left school at the age of 12 to become an apprentice printer in Hull. He completed his apprenticeship seven years later and moved to London, where in 1807 he joined the Royal Academy Schools. There he studied under Thomas Lawrence and trained by copying works by other artists. Etty earned respect at the Royal Academy of Arts for his ability to paint realistic flesh tones, but had little commercial or critical success in his early years in London. More on William Etty

The queen silently swore revenge for her shame. Next day, she summoned Gyges to her chamber. Gyges thought it was a routine request, but she confronted him immediately and presented him with two choices. One was to kill Candaules and seize the throne with Nyssia as his wife. The second was to be executed immediately by her trusted servants.He decided to take the first course of action and assassinate the king. The plan was that he should hide in the royal bedroom as before but this time from the king. After Candaules fell asleep, Gyges crept forward and stabbed him to death. 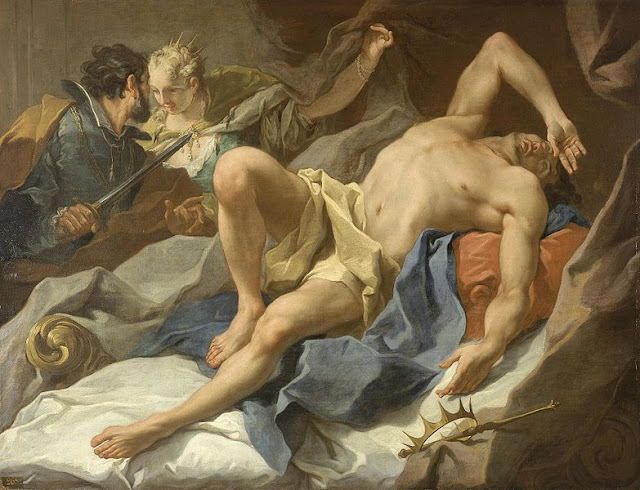 Giambattista Pittoni or Giovanni Battista Pittoni (6 June 1687 - 6 November 1767) was a Venetian painter of the late Baroque or Rococo period. He was among the founders of the Academy of Fine Arts of Venice , of which in 1758 he became the second president, succeeding Tiepolo.

Pittoni studied under his uncle Francesco Pittoni, a well-known but undistinguished painter of the Venetian Baroque.

Pittoni joined the Fraglia of the Venetian Painters, the Venetian guild of painters, in 1716. From, probably, the same year until his death he was a member of the College of Painters, of which he became prior in 1729.  He was elected to the Clementine Academy of Bologna in 1727. In 1750 he was one of the forty-six members of the Veneta Publish Academy of Painting, Sculpture and Architecture, which later became the Academy of Fine Arts of Venice ; from 1758 to 1760 he succeeded Tiepoloas president of the academy, and was elected for a second term in 1763–64. More on Giambattista Pittoni

Gyges married the queen as she had insisted but many Lydians did not at first accept him as their ruler. In order to prevent a civil war, Gyges offered to have his position confirmed or refused by the Delphic Oracle. He agreed that he would restore the throne to the Heracleidae if the Oracle declared against him. The Oracle supported him and his dynasty was established. More on Candaules and Nyssia