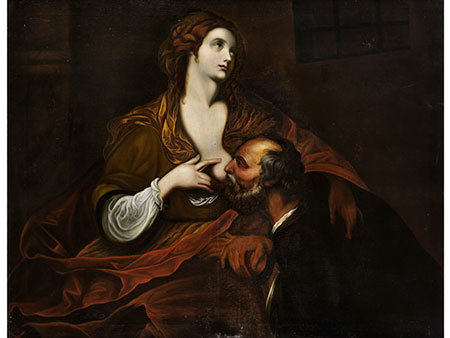 The illustrated story goes back to the Roman author Valerius Maximus (14 AD-37 AD).  The exemplary story of a woman, Pero, who secretly breastfeeds her father, Cimon, after he is incarcerated and sentenced to death by starvation.

It was recounted approximately in 1362 by Giovanni Boccaccio (1313-1375). After him, several hundred paintings, drawings and sculptures were created, which took up the theme again. It tells the erotic story of a young woman breastfeeding an older man. In the painting in a simple interior with a window on the top right, one sees in the center of the young woman with brown hair and flowing wide red-brown noble robes. In front of her kneels an old man with a full beard, in the profile to the left, who has crossed his hands on her lap and to which she extends her breast to breastfeed with her right hand. Particularly striking her white flesh and her almost white face. Your shiny, well-filled eyes she has directed laterally upwards. More on this painting

Painting in 17th-century Italy was an international endeavor. Large numbers of artists traveled to Rome, especially, to work and study. They sought not only the many commissions being extended by the Church but also the chance to learn from past masters. Most of the century was dominated by the baroque style, whose expressive power was well suited to the needs of the Counter-Reformation Church for affecting images.

The drama and movement that characterized the baroque—in sculpture and architecture as well as painting—can be first seen, perhaps, in the work of Caravaggio, who died in 1610. His strong contrasts of light and dark and unblinking realism were taken up by many artists, including the Italian Orazio Gentileschi, the Spaniard Jusepe de Ribera, and the Frenchmen Valentin de Boulogne and Simon Vouet, all of whom worked in Italy. Other artists carried Caravaggio’s so-called tenebrist style to northern Europe.

The more classical approach of the Carracci and their students Guercino and Domenichino was also an important force in 17th-century painting. It provided a foundation for the rational clarity that structured the work of French artists Nicolas Poussin and Claude Lorrain, both of whom worked in Rome for most of their lives. More on the ITALIAN SCHOOL, (17th century)