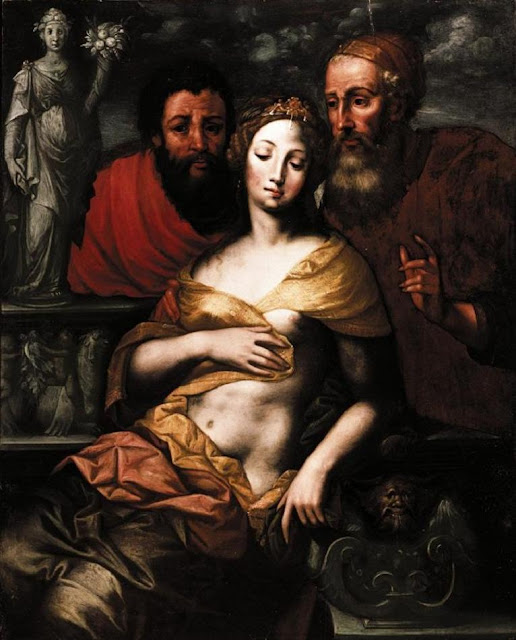 
A fair Hebrew wife named Susanna was falsely accused by lecherous voyeurs. As she bathes in her garden, having sent her attendants away, two lustful elders secretly observe the lovely Susanna. When she makes her way back to her house, they accost her, threatening to claim that she was meeting a young man in the garden unless she agrees to have sex with them.


She refuses to be blackmailed and is arrested and about to be put to death for promiscuity when a young man named Daniel interrupts the proceedings, shouting that the elders should be questioned to prevent the death of an innocent. After being separated, the two men are questioned about details of what they saw, but disagree about the tree under which Susanna supposedly met her lover. In the Greek text, the names of the trees cited by the elders form puns with the sentence given by Daniel. The first says they were under a mastic, and Daniel says that an angel stands ready to cuthim in two. The second says they were under an evergreen oak tree, and Daniel says that an angel stands ready to saw him in two. The great difference in size between a mastic and an oak makes the elders' lie plain to all the observers. The false accusers are put to death, and virtue triumphs. More about Susanna

The theme of the Old Testament is reproduced here in an unusual way as a remarkably calm scene, so that not the physical urgency of the two old men. As always, so too is the biblical theme cause and pretext to bring the female nude in the picture. The beautifully presented slim female figure, here only scantily clad, a breast released between the yellow cloths, corresponds to the elegant Mannerist taste of the time, also concerning the soft contours, the Sfumato, which here belongs exclusively to the female figure. The upper body of Susanna placed almost diagonally in the picture, in contrast to the two almost vertically rendered male figures in the background. The right bearded old man looks down at the young beauty with his hand held high, which is supposed to indicate his persuasion. Only the left male figure makes eye contact with the viewer. More on this painting

Vincent Sellaer (1490–1564), was a Flemish Renaissance painter known for his mythological and religious subjects. His works stand out through their monumentality of form and their mixing of Italian and northern styles.

Very few biographical details of this artist are known with any level of certainty, other than that he flourished in Mechelen around 1538.

While there is still no consensus among scholars, a majority believe that Vincent Sellaer should be identified with the artist to whom the early 17th century biographer Karel van Mander referred as Vincent Geldersman. Van Mander described Sellaer as a good painter of allegories, such as Leda with two eggs, Susanna and the elders, and Cleopatra with the asp. Van Mander mentioned him in his Life of Frans Minnebroer as one of the notable painters of Mechelen. While many known versions of a Leda and the Swan have been attributed to Sellaer, none has survived that depicts a Leda with eggs.

Some art historians such as G.J. Hoogewerff have speculated that Sellaer worked for some time in Brescia and may have visited other Italian cultural centres. This Italian stay would be situated in the years 1521 to 1524.


Scholars believe that Sellaer was the foremost painter in Mechelen, and his patrons were likely members of the court and the city’s Great Council. More on Vincent Sellaer


Please visit my other blogs: Art Collector, Mythology, Marine Art, Portrait of a Lady, The Orientalist, Art of the Nude and The Canals of Venice, Middle East Artists, and visit my Boards on Pinterest