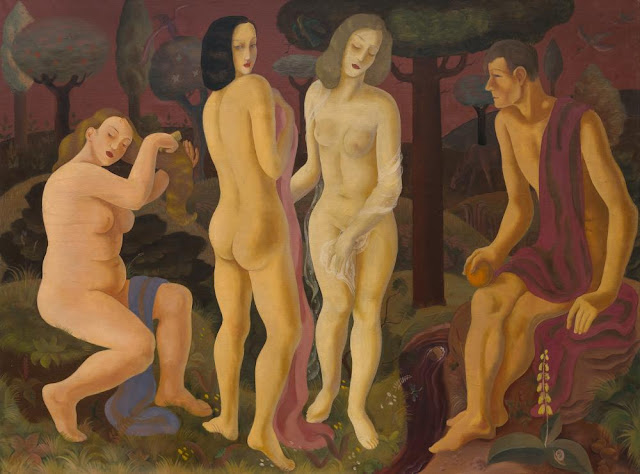 The influence of the art of Italy and especially of the Renaissance can also be seen in this work. Thus, the frieze-like structure and the detailed representation of the vegetation to Paolo Uccello reminiscent, while Sandro Botticelli's painting with the same subject Paris also on the right sitting on a stone with the golden apple in his hand. The high cheekbones and the thin lips of Paris in the present work, however, suggest a self-portrait of the artist who has to choose between three beauties, blonde, brunette or black-haired. According to Cornelia Ziegler, daughter of the artist. More on this painting

THE JUDGEMENT OF PARIS was a contest between the three most beautiful goddesses of Olympos--Aphrodite, Hera and Athena--for the prize of a golden apple addressed "To the Fairest."

The story began with the wedding of Peleus and Thetis which all the gods had been invited to attend except for Eris, goddess of discord. When Eris appeared at the festivities she was turned away and in her anger cast the golden apple amongst the assembled goddesses addressed "To the Fairest." Three goddesses laid claim to the apple--Aphrodite, Hera and Athena. Zeus was asked to mediate and he commanded Hermes to lead the three goddesses to Paris of Troy to decide the issue. The three goddesses appearing before the shepherd prince, each offering him gifts for favour. He chose Aphrodite, swayed by her promise to bestow upon him Helene, the most beautiful woman, for wife. The subsequent abduction of Helene led directly to the Trojan War and the fall of the city. More on the THE JUDGEMENT OF PARIS

Richard Ziegler was born on May 3, 1891 in Pforzheim. After he attended the Gymnasium, Ziegler went to Great Britain for a year. On his return, he studied philology in Geneva, Greifswald, and Heidelberg, where he received his doctorate in 1919. Though he began painting as a child, art played no deciding role in his studies.

After his studies though, he decided to become a painter. In the following years, Richard Ziegler produced book illustrations, woodcuts, and oil paintings. In 1925, he settled in Berlin as a professional artist, but after the Nazis came to power in 1933, he left Germany.

Until 1937, Ziegler lived on the island of Korcula in Croatia. There he produced three series of monotypes, in which he dealt with the political events in Germany. From 1937 until the end of the war, he lived in England. In 1963, Richard Ziegler went to Spain to live on the island of Mallorca. His late expressive-realistic work was produced there. Richard Ziegler spent his last years in his hometown of Pforzheim.