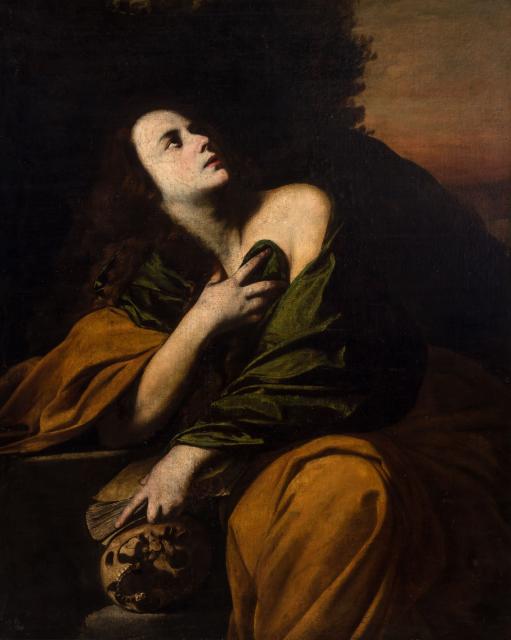 According to the tenets of the 17th–century Catholic church, Mary Magdalene was an example of the repentant sinner and consequently a symbol of the Sacrament of Penance. According to legend, Mary led a dissolute life until her sister Martha persuaded her to listen to Jesus Christ. She became one of Christ's most devoted followers and he absolved her of her former sins. More on The Penitent Magdalen

Penitent Magdalen refers to a post-biblical period in the life of Mary Magdalen.

The sacrament of Penance had important significance in Counter-Reformation spirituality, and artists frequently portrayed penitent saints as exemplars of religious fervor. Such works were meant to inspire a greater devotion. On the other hand, the popularity of The Magdalene as a subject is also associated with her implied sexuality. Her passive gaze and partially naked body appealed to male viewers, for whom such paintings offered a moralizing context through which to engage with the sensuality of the female form. The Penitent Magdalene

José de Ribera (January 12, 1591 – September 2, 1652) was a Spanish Tenebrist painter and printmaker, better known as Jusepe de Ribera. He also was called Lo Spagnoletto ("the Little Spaniard") by his contemporaries and early writers. Ribera was a leading painter of the Spanish school, although his mature work was all done in Italy. More on José de Ribera