01 Work, Interpretation of the bible, With Footnotes - 128 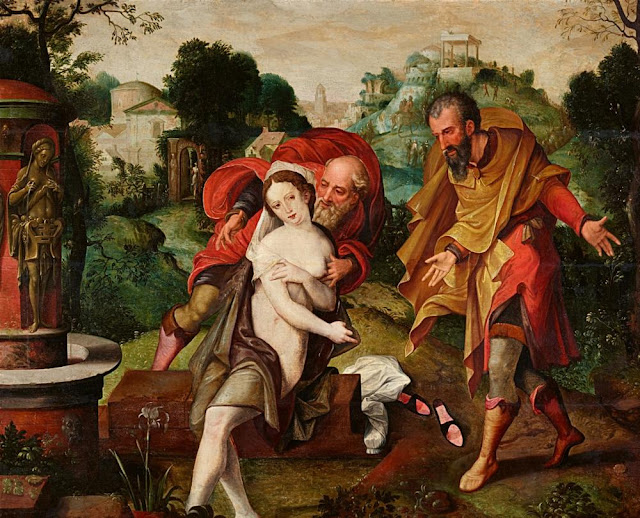 A fair Hebrew wife named Susanna was falsely accused by lecherous voyeurs. As she bathes in her garden, having sent her attendants away, two lustful elders secretly observe the lovely Susanna. When she makes her way back to her house, they accost her, threatening to claim that she was meeting a young man in the garden unless she agrees to have sex with them.


She refuses to be blackmailed and is arrested and about to be put to death for promiscuity when a young man named Daniel interrupts the proceedings, shouting that the elders should be questioned to prevent the death of an innocent. After being separated, the two men are questioned about details of what they saw, but disagree about the tree under which Susanna supposedly met her lover. In the Greek text, the names of the trees cited by the elders form puns with the sentence given by Daniel. The first says they were under a mastic, and Daniel says that an angel stands ready to cuthim in two. The second says they were under an evergreen oak tree, and Daniel says that an angel stands ready to saw him in two. The great difference in size between a mastic and an oak makes the elders' lie plain to all the observers. The false accusers are put to death, and virtue triumphs. More about Susanna

He was born in Antwerp and is considered to have run a workshop there with several pupils. His name is derived from a painting in Vienna. He is known for landscapes and religious works, and possibly travelled to Rome. Though a monogram of "LK" was discovered in one of his paintings, to conclude that this person was the Leonart Kroes mentioned as teacher in Karel van Mander's biography of Gillis van Coninxloo is incorrect. More on The Master of the Prodigal Son