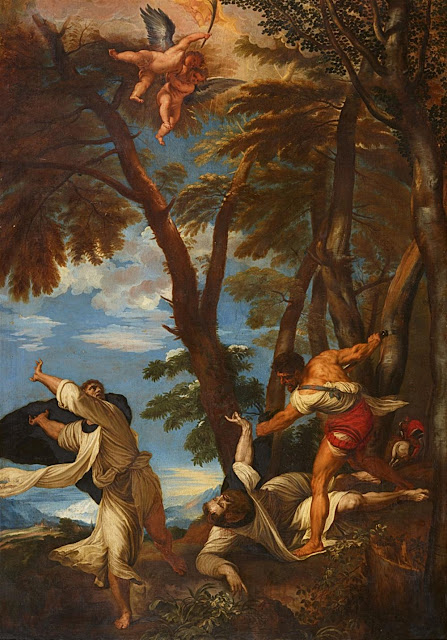 Saint Peter of Verona O.P. (1206 – April 6, 1252), also known as Saint Peter Martyr, was a 13th-century Italian Catholic priest. He was a Dominican friar and a celebrated preacher. He served as Inquisitor in Lombardy, was killed by an assassin, and was canonized as a Catholic saint 11 months after his death, making this the fastest canonization in history.

He was born in the city of Verona into a family perhaps sympathetic to the Cathar heresy. Peter went to a Catholic school, and later to the University of Bologna, where he is said to have maintained his orthodoxy and at the age of fifteen, met Saint Dominic. Peter joined the Order of the Friars Preachers (Dominicans) and became a celebrated preacher throughout northern and central Italy.

From the 1230s on, Peter preached against heresy, and especially Catharism, which had many adherents in thirteenth-century Northern Italy. Because of this, a group of Milanese Cathars conspired to kill him. They hired an assassin, one Carino of Balsamo. Carino's accomplice was Manfredo Clitoro of Giussano. On April 6, 1252, when Peter was returning from Como to Milan, the two assassins followed Peter to a lonely spot near Barlassina, and there killed him and mortally wounded his companion, a fellow friar named Dominic.

Carino struck Peter's head with an axe and then attacked Domenico. Peter rose to his knees, and recited the first article of the Symbol of the Apostles (the Apostle's Creed). Offering his blood as a sacrifice to God, according to legend, he dipped his fingers in it and wrote on the ground: "Credo in Unum Deum", the first words of the Nicene Creed. The blow that killed him cut off the top of his head, but the testimony given at the inquest into his death confirms that he began reciting the Creed when he was attacked.

Dominic was carried to Meda, where he died five days afterwards. More on Saint Peter

Recognized by his contemporaries as "The Sun Amidst Small Stars", Titian was one of the most versatile of Italian painters, equally adept with portraits, landscape backgrounds, and mythological and religious subjects. His painting methods, particularly in the application and use of color, would exercise a profound influence not only on painters of the Italian Renaissance, but on future generations of Western art.

During the course of his long life, Titian's artistic manner changed drastically but he retained a lifelong interest in color. Although his mature works may not contain the vivid, luminous tints of his early pieces, their loose brushwork and subtlety of tone are without precedent in the history of Western painting. More Titian