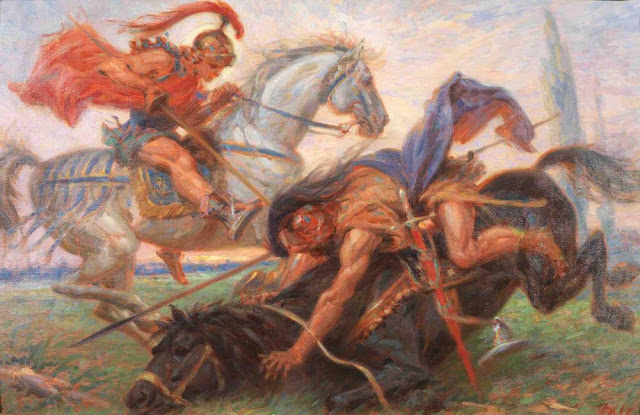 Saint George (circa 275/281 – 23 April 303 AD) was a soldier in the Roman army who later became venerated as a Christian martyr. His parents were Christians of Greek background; his father Gerontius was a Roman army official from Cappadocia and his mother Polychronia was from Lydda, Syria Palaestina. Saint George became an officer in the Roman army in the Guard of Diocletian, who ordered his death for failing to recant his Christian faith.

In the fully developed Western version of the Saint George Legend, a dragon, or crocodile, makes its nest at the spring that provides water for the city of "Silene" (perhaps modern Cyrene in Libya or the city of Lydda in Palistine, depending on the source). Consequently, the citizens have to dislodge the dragon from its nest for a time, to collect water. To do so, each day they offer the dragon at first a sheep, and if no sheep can be found, then a maiden is the best substitute for one. The victim is chosen by drawing lots. One day, this happens to be the princess. The monarch begs for her life to be spared, but to no avail. She is offered to the dragon, but then Saint George appears on his travels. He faces the dragon, protects himself with the sign of the Cross, slays the dragon, and rescues the princess. The citizens abandon their ancestral paganism and convert to Christianity. More on Saint George


Dimitris Biskinis was born in 1891 in Patra. In 1901 he enrolled as auditor at the School of Fine Arts of Athens where he studied painting from 1901 until 1911. In 1920 he studied in Paris and Rome. With his return to Greece he engaged in the illustration of books and advertising. In 1928 he became professor at the ASKT where he taught until his death in 1947. More on Dimitris Biskinis

Please visit my other blogs: Art Collector, Mythology, Marine Art, Portrait of a Lady, The Orientalist, Art of the Nude and The Canals of Venice, Middle East Artists, and 365 Saints, also visit my Boards on Pinterest
Images are copyright of their respective owners, assignees or others. Some Images may be subject to copyright
I don't own any of these images - credit is always given when due unless it is unknown to me. if I post your images without your permission, please tell me.
I do not sell art, art prints, framed posters or reproductions. Ads are shown only to compensate the hosting expenses.
If you enjoyed this post, please share with friends and family.
Thank you for visiting my blog and also for liking its posts and pages.
Please note that the content of this post primarily consists of articles available from Wikipedia or other free sources online.