In Greek mythology, Danaë was a daughter of King Acrisius of Argos and his wife Queen Eurydice. She was the mother of the hero Perseus by Zeus. She was sometimes credited with founding the city of Ardea in Latium during the Bronze Age.

Danaë became a popular subject in the early 1900s for many artists; she was used as the quintessential symbol of divine love, and transcendence. 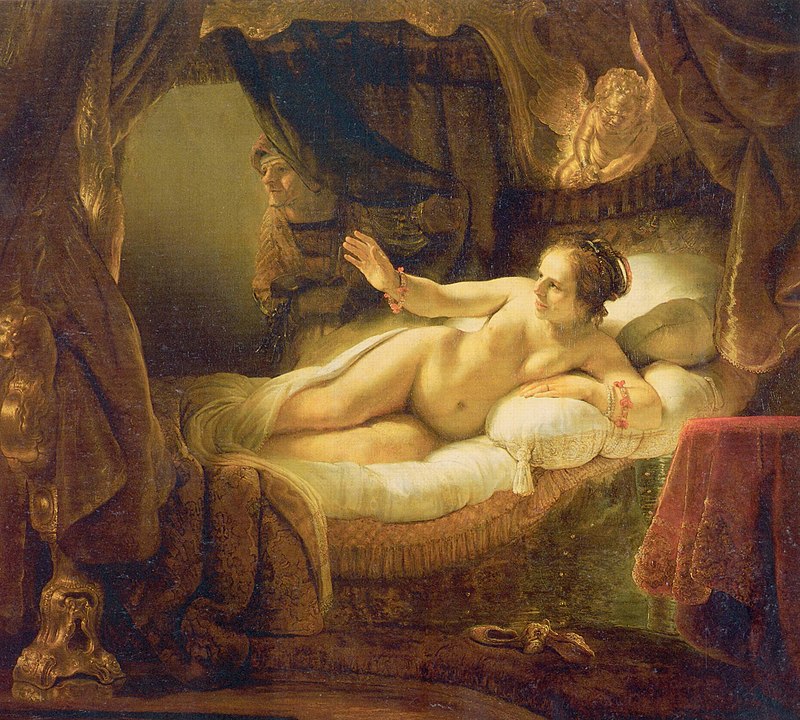 Danaë is Rembrandt's painting from the collection of Pierre Crozat which since the 18th century has resided in the Hermitage Museum, St. Petersburg, Russia. It is a life-sized depiction of the character Danaë from Greek mythology, the mother of Perseus. She is presumably depicted as welcoming Zeus, who impregnated her in the form of a shower of gold. Given that this is one of Rembrandt's most magnificent paintings, it is not out of the question that he cherished it, but it also may have been difficult to sell because of its eight-by-ten-foot size. Although the artist's wife Saskia was the original model for Danaë, Rembrandt later changed the figure's face to that of his mistress Geertje Dircx. More

Disappointed by his lack of male heirs, Acrisius asked an oracle if this would change. The oracle told him that he would be killed by his daughter's son. She was childless and, meaning to keep her so, he shut her up in a bronze tower or cave. But Zeus came to her in the form of golden rain, that streamed in through the ceiling and down into her womb. Soon after, their child Perseus was born. 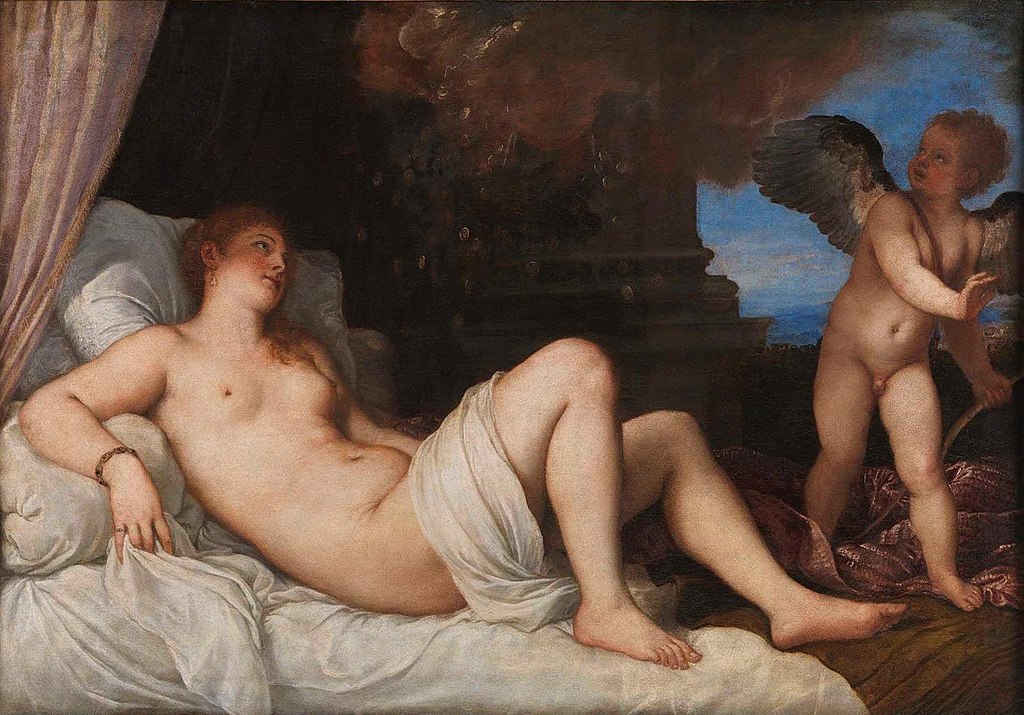 This painting shows the youthful figure of Eros alongside Danaë. Known as "Danaë and the Shower of Gold" series, comprised of at least five oil-on-canvas paintings by the Venetian master Titian, completed between 1553 and 1556. The first version, now in Naples, was painted between 1544-46.

Danaë with Nursemaid or Danaë Receiving the Golden Rain, 1553–1554. Here, an aging nursemaid has replaced Eros, while the cloth covering Danaë's upper thigh is absent, leaving her naked.

Titian and his workshop produced at least five versions of the painting, which vary to degrees. The dog resting at Danaë's side is absent in some versions, while her companion is a god in some and a haggish nursemaid in others. In all, Danaë is a depicted as a voluptuous figure. Her legs are open in all, with her left leg arched; this being a central painterly motif in each. More 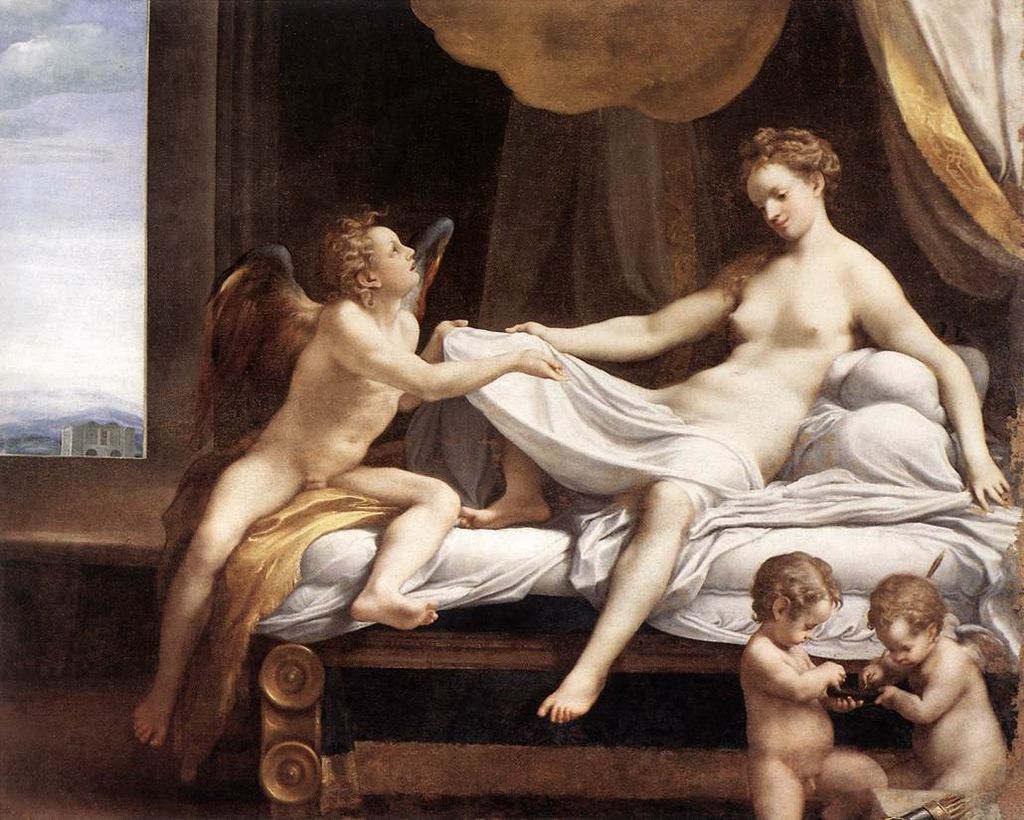 Correggio portrays Danäe lying on a bed, while a child Eros undresses her as gold rains from a cloud. At the foot of the bed, two putti are testing gold and lead arrows against a stone. The work was commissioned by the Duke of Mantua Federico II Gonzaga, as a part of a series portraying Jupiter's loves, perhaps destined to the Ovid Hall in the Palazzo Te of Mantua. After Federico's death it went to Spain. More

Unwilling to provoke the wrath of the gods or the Furies by killing his offspring, Acrisius cast Danaë and Perseus into the sea in a wooden chest. The sea was calmed by Poseidon and at the request of Zeus the pair survived. 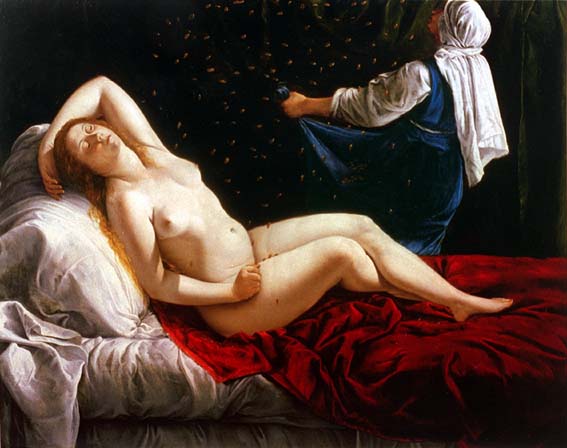 In the background is a servant, clearly taken from a painting by Titian, which captures the gold coins in her dress. The clothing and headscarves of the maid contrast with Danae's nakedness, which is framed by the long golden tresses falling along her arm.


Artemisia was not yet twenty years old when she completed this painting. More 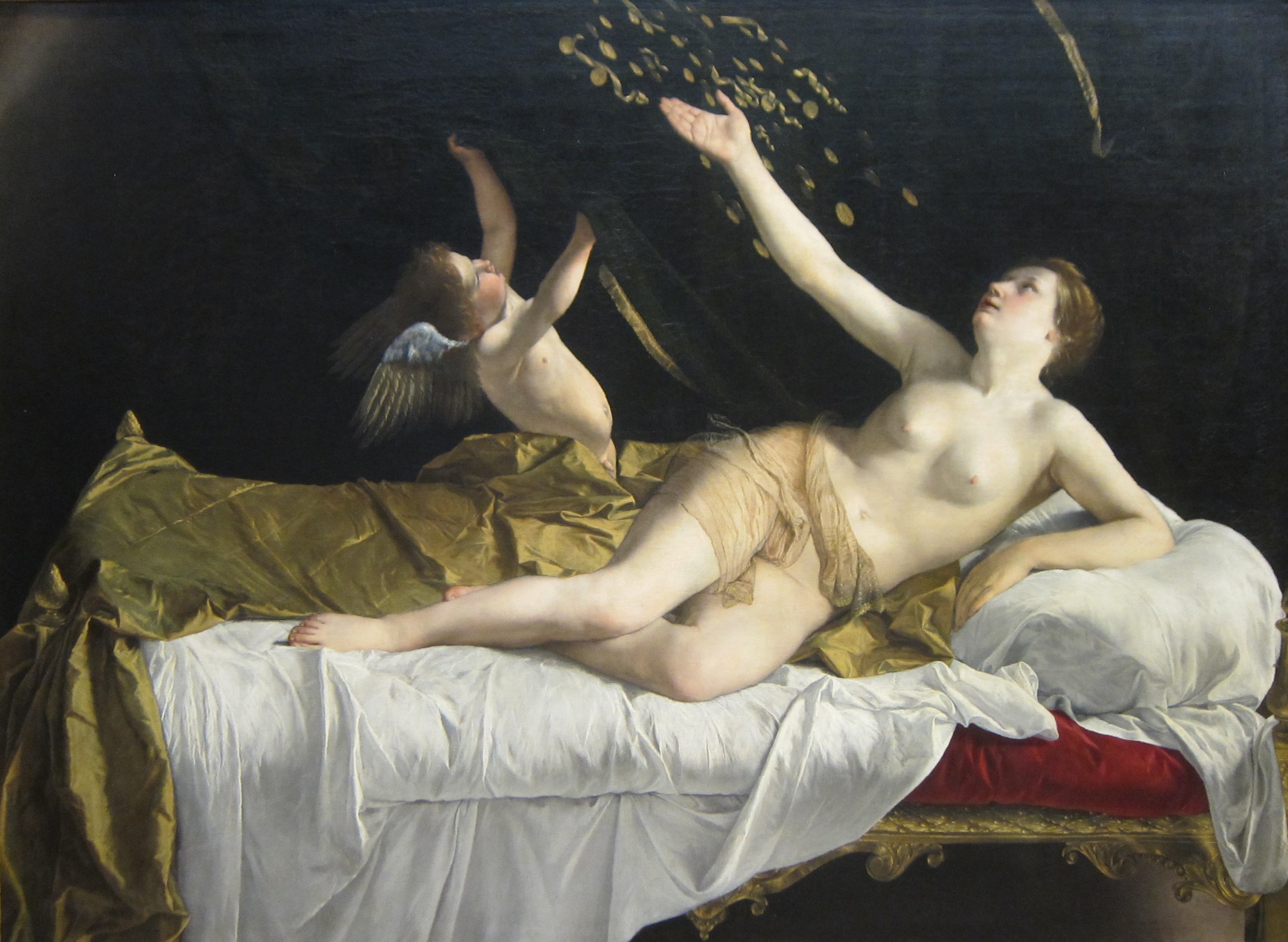 They washed ashore on the island of Seriphos, where they were taken in by Dictys – the brother of King Polydectes – who raised Perseus to manhood.

Danae, according to tradition, appears naked, lying on a bed. Like the Danae of Titian, Tintoretto participates in the scene as a servant, but here the similarities end.

In this work, the servant is not an old woman, and for Danae, the painter used Veronica Franco, poet and Venetian courtesan as a model. The young servant is focused on a specific task: to collect the falling money. A striking element of the work is the dog asleep in the lower left corner, traditionally a symbol of conjugal fidelity, such as in the Arnolfini Portrait by Jan van Eyck . In the picture, where Zeus commits adultery with the wife, the dog has a somewhat ironic tone.


Tintoretto frequently resorted to the archetypal female blond woman in his mythological works and the Old Testament , as shown in this painting. More

The King was charmed by Danaë but she had no interest in him. Consequently he agreed not to marry her only if her son would bring him the head of the Gorgon Medusa. Using Athena's shield, Hermes's winged sandals and Hades' helmet of invisibility, Perseus was able to evade Medusa's gaze and decapitate her.

Later, after Perseus brought back Medusa's head and rescued Andromeda, the oracle's prophecy came true. He started for Argos, but learning of the prophecy instead went to Larissa, where athletic games were being held. By chance, an aging Acrisius was there and Perseus accidentally struck him on the head with his javelin (or discus), fulfilling the prophecy. More

Danae symbolizes the land suffering from drought and on which a fertile rain down from the sky. 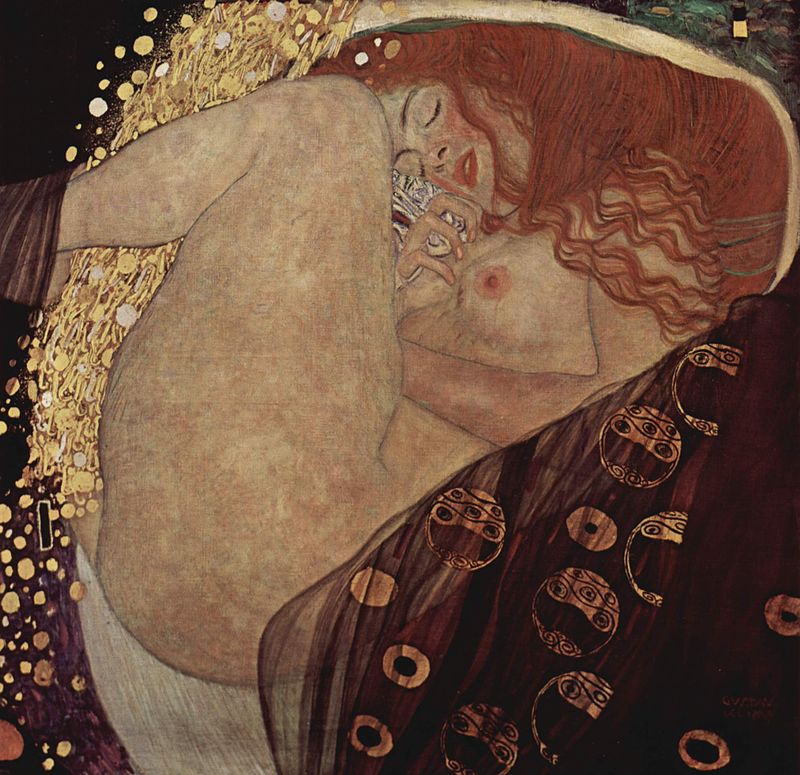 Created by Gustav Klimt in 1907, Danaë is an example of Symbolism. More 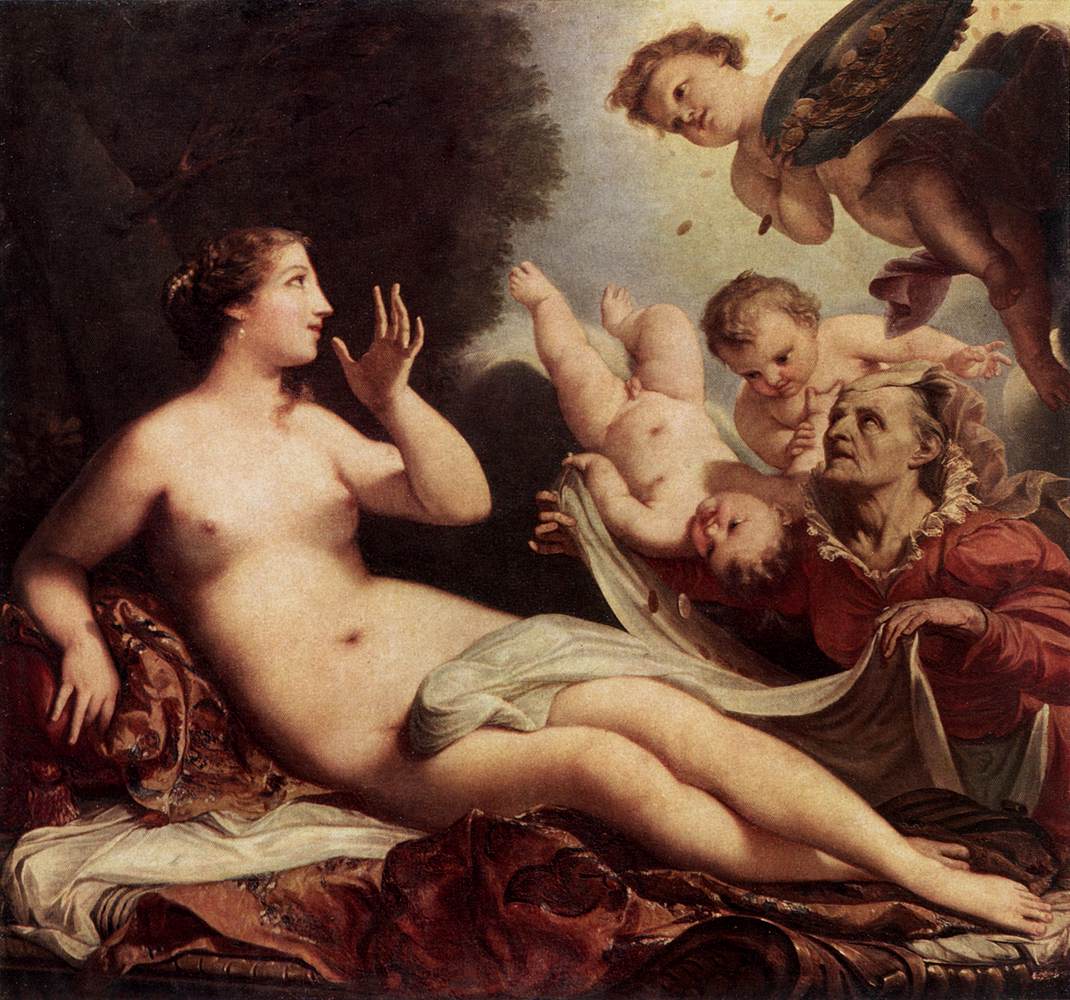 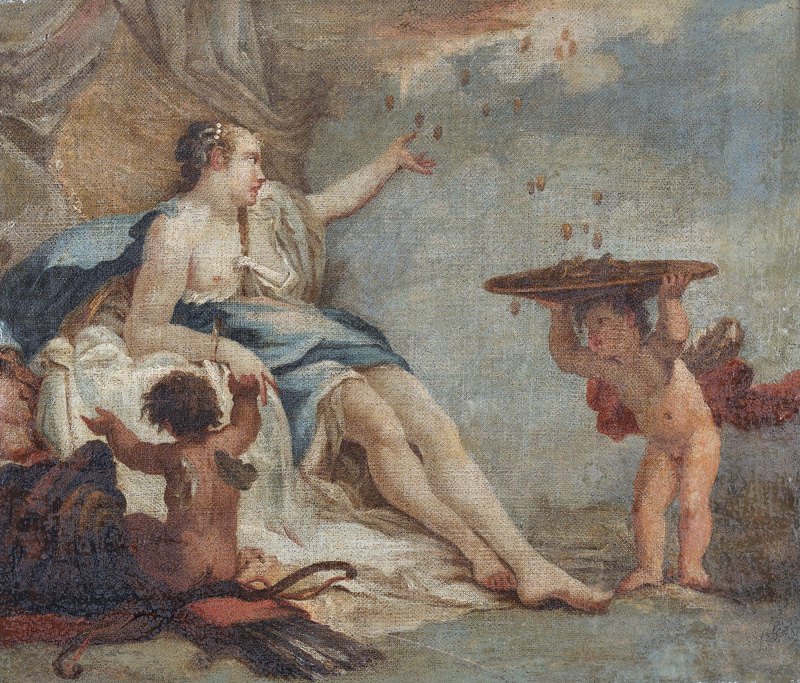 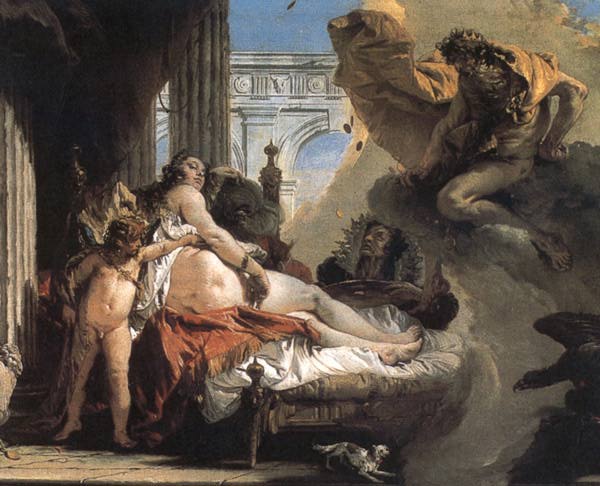 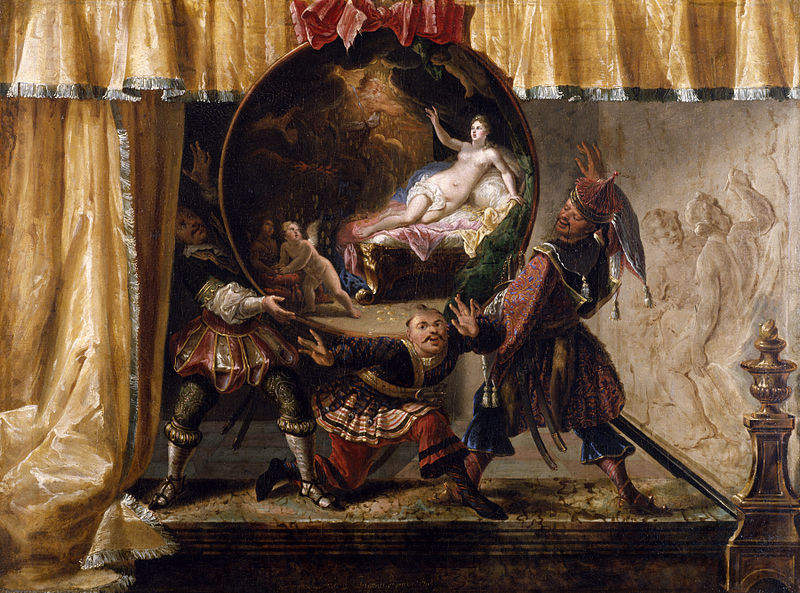 Originally mounted as a screen to cover a fireplace during warm weather, in this exotic painting the artist has transformed the hearth into a miniature stage. Three fanciful Chinese characters hold aloft a circular screen on which is depicted the mythological story of Zeus showering Danaë with gold. A pair of figures, painted in grisaille on the side wall, incise their names on a tree trunk, a motif symbolizing eternal love. The fire screen is the earliest recorded work of Vigoureux Duplessis, an artist who was associated with decorative projects for the Paris Opera, the Royal Academy of Music, and the Beauvais Tapestry Manufactor. More
Posted by Henry Zaidan at 12:08 PM