01 Work, CONTEMPORARY Interpretation of the Bible! With Footnotes - 29 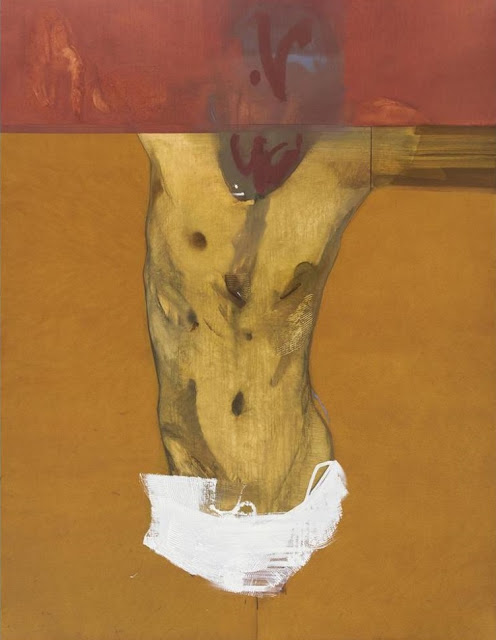 The crucifixion of Jesus occurred in 1st-century Judea, most likely between AD 30 and 33. Jesus' crucifixion is described in the four canonical gospels, referred to in the New Testament epistles.

Jesus was arrested and tried by the Sanhedrin, and then sentenced by Pontius Pilate to be scourged, and finally crucified by the Romans. Jesus was stripped of his clothing and offered wine mixed with myrrh or gall to drink before being crucified. He was then hung between two convicted thieves and died some six hours later. During this time, the soldiers affixed a sign to the top of the cross stating "Jesus of Nazareth, King of the Jews" which, according to the Gospel of John, was written in three languages. After Jesus' death, one soldier pierced his side with a spear to be certain that he had died. More on The crucifixion of Jesus

Gustavo Aceves (b. 1957, Mexico City) currently lives and works in Pietrasanta, Italy. Aceves is a self-taught artist who quickly built up a reputation as an influential painter working in Latin America. His paintings and works on paper focusing on the human figure draws upon Western pictorial traditions whilst using the large-scales common in Mexican murals. Aceves’ work has been exhibited around the world since the late 1970s including in the Museo del Palacio Bellas Artes in Mexico City, the Venice Biennale and the Beijing Biennale. His work can be found in the permanent collections of Museo Memoria y Tolerancia, Mexico City and the Vatican Museum, Rome. More on Gustavo Aceves