01 Work, Interpretation the bible, With Footnotes - 120 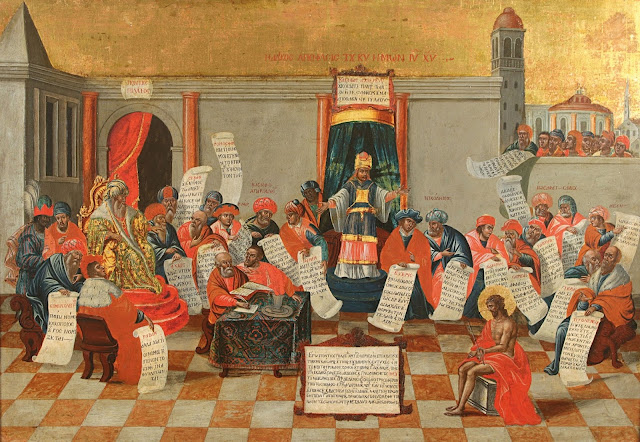 The present painting depicts Jesus after his arrest in Jerusalem and prior to his dispensation by Pontius Pilate. It is an event reported by all four canonical gospels of the New Testament. As can be seen, Jesus sits quietly and does not mount a defense, rarely responding to the accusations against him. The Jewish authorities condemn Jesus for not denying that he is the Son of God. Pontius Pilate, the governor of Roman Judaea, asks that he be tried for claiming to be the King of the Jews.

From a historical perspective, in the era in which the narrative is set, the Sanhedrin body was an ad hoc gathering, rather than a fixed court. The portrayal of the Sanhedrin body contradicts that of Jewish tradition and texts, which portray the Sanhedrin to be an established court based in Jerusalem with strict guidelines on how to function  More on this work

Italian School, 16th Century. The first two decades of the 16th century witnessed the harmonious balance and elevated conception of High Renaissance style, perfected in Florence and Rome by Leonardo, Raphael, and Michelangelo. It brought together a seamless blend of form and meaning. In Venice, Bellini, Giorgione, and Titian devoted themselves to an art that was more sensual, with luminous color and a tactile handling of paint, preoccupations that would attract Venetian artists for generations, including Tintoretto and Veronese later in the century.

In the 1520s, Florence and Rome, but not Venice, saw a stylistic shift following the social and political upheaval ensuing from the disastrous Sack of Rome. Mannerism, as practiced by Bronzino, Pontormo, and Rosso, was a self-consciously elegant style that traded naturalism for artifice, employing unnaturally compressed space, elongated figures, and acid color. While mannerism became popular internationally, and lingered in northern Europe, by around 1580 it had fallen out of favor in Italy. One factor was the desire of the Church, challenged by the Protestant Revolution, to connect with the faithful. In place of mannerism’s ingenuous complications and artificiality, the Counter-Reformation Church required painting that was direct and emotionally resonant. The “reform of painting,” as it was called, was launched by two brothers and a cousin in Bologna: Annibale, Agostino, and Lodovico Carracci. They established an academy that emphasized drawing from life and looked to inspiration from Titian and other Renaissance masters, restoring the naturalism and classical balance of the early 16th century. More Italian School, 16th Century